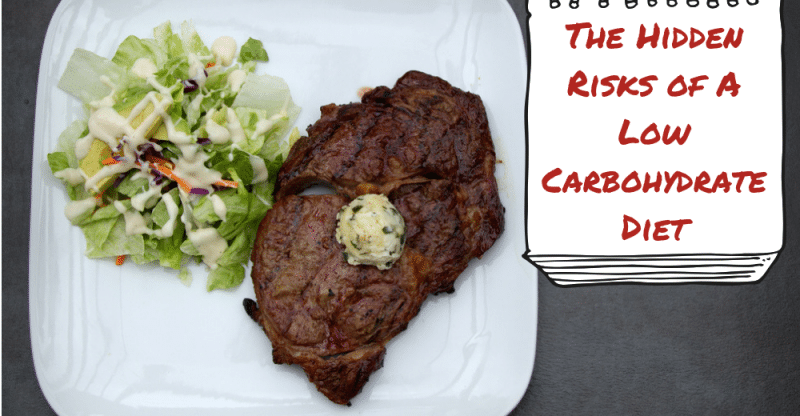 Low carbohydrate diets have become extremely popular since the turn of the century, owing to the fact that they do deliver significant weight loss in a relatively short amount of time, helping persons that have tried multiple times before and failed, to come closer to their ideal weight.

But even though there are unquestionable benefits about this diet type, there are also inherent risks that you open up yourself to even if you are very careful, regardless of if you are informing yourself sufficiently before starting.

While these risks may seem trivial to many, it is important that you recognize them early, and take steps to address them before the situation devolves into a critical one.

Here are a few of the potential risks of a low carbohydrate diet to keep in mind before embarking, or even if you’re currently on it but haven’t seen adverse effects yet:

This is a funny one considering many people on a typical diet not restricting carbohydrates are chronically dehydrated to varying stents anyway.

But the dehydration that accompanies a low-carb diet is on a next level. By nature, carbohydrate molecules are bound to water molecules in storage (as glycogen in muscles or the liver).

On the low-carb diets, glycogen stores are usually depleted in a few days after starting carbohydrate restriction, meaning that much of the water stores along with these carbohydrates in the muscles and liver are excreted in the process.

This elimination is significant, and can trigger major episodes of dehydration if you’re not careful.

Naturally, when adapting to a low-carb lifestyle, you have to make dietary changes that involve restriction or elimination of specific foods, often times fruits and starches.

It is well known that fruits possess a diverse range of vitamins and other nutrients, while starchy vegetables and legumes contain fiber and other phytonutrients. The elimination of these foods can open up nutritional deficiencies that can have an effect on performance and overall health quickly if not addressed.

This is why consumption of specific supplements are advised on low-carb diets, in order to offset the possibility of deficiency opening up.

While the vast majority of people that start the low-carb lifestyle will initially achieve weight loss, their progress can come to a screeching halt in no time flat leaving them scratching their heads.

What persons failed to realize is that following the restriction of carbohydrates, the number of calories consumed daily usually decreases in like fashion, unless you are actively taking steps to replace the calories lost with the other macronutrient groups, namely fats and protein.

There have been findings that indicates low caloric diets do contribute to longevity, but since you know that most persons that follow the low-carb diet are looking for weight loss, you will be disappointed with your results after a few weeks if you don’t carefully calculate macronutrient requirements.

Low-carb diets are not the best idea for athletes that are trying to improve performance, strength or achieve muscle hypertrophy, as carbs lend themselves to all of these processes.

Low-carb diets that promote the production of ketone bodies for use as fuel are a little more forgiving, as these alternate energy sources do a reasonable job of fulfilling energy requirements. They are not as efficient as carbohydrates for the production of ATP, and will not yield the insulin response that promotes uptake of nutrients into muscle cells – making the diet less than ideal when trying to up your game.

On that note, it is very common to observe a decrease in performance after restricting carbohydrates, as the body tries to adapt to a more fat-based metabolism. Over time, this reduction in performance may be mitigated a bit thanks to the ketone bodies, but you should not expect peak performance on a low-carb diet.

Dehydration coupled with the loss of these electrolyte minerals is usually referred to as the keto flu, which is why consumption of exogenous electrolytes is very important at this period in time. Your body will eventually regain fluid homeostasis, but during the initial week or two you need to consume additional electrolytes.

Owing to the attractiveness of the low-carb diets, everyone may be interested in trying it, in order to improve general health.

Nowhere is this more evident than in type II diabetics who have heard great things about the low-carb diet, and may be desirous of trying it in order to lose some weight and achieve better blood glucose control.

This is commendable, but can quickly become disastrous if not done done under a physician’s care, or skilled nutritionist who also has experience dealing with metabolic disorders.

For instance, diabetics with poor blood glucose control are prone to developing ketoacidosis – a condition characterized by accumulation of ketone bodies in the blood, from the metabolism of fat.

Diabetic ketoacidosis is different from deliberate ketosis, as ketones can cause an unsafe drop in the body’s pH level so that it is regarded as acidic. Restricting carbohydrates will only hasten the change in pH that occurs, leading to coma, or even death.

For diabetics, a better approach is moderation of carbohydrates, which entails consumption of a smaller amount of slow digesting carbohydrates in order to improve insulin sensitivity and glucose uptake in liver and muscle cells.

The restriction of carbohydrates will tell on your mental performance, be it lack of concentration, or the inability of your brain to delegate executive function.

Owing to the fact that glucose is the brain’s primary source of fuel, it’s only obvious that restriction of the source will lead to mental fog and sluggishness, making you appear inept if your job requires a lot of mental fortitude.

So what should you do? You want to experience the benefits of the low-carb diet, but don’t want to open up yourself to the hidden risks.

A sensible approach to follow a staggered low-carb diet, or one that provides ample fuel to the organs that need it, but not in excess to promote fat storage and other effects associated with high blood glucose.

As much as possible, if this is your first time attempting the low-carb lifestyle, do yourself a favor and consult a medical professional beforehand. You will save yourself from the heartache that is common when jumping into something uninformed.