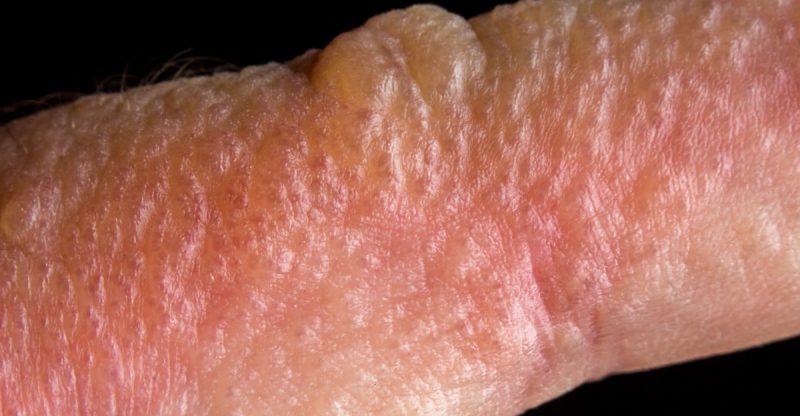 Poison ivy is a common plant that can be found growing abundantly on many continents, and is best known to cause highly visible rashes that are also severely irritating.

When these rashes do appear, they can last for several weeks during which all you can do is try to alleviate the discomfort caused.

Even though it is clearly a case of being caused by the poison ivy plant, in particular it is a specific oil found in the plants known as urushiol that triggers the allergic reaction.

The oil is found in numerous parts of the plant, including the stem, roots, leaves, and can also be found in related plants such as poison oak or poison sumac.

It is important to know that poison ivy isn’t technically poison, just a very annoying irritant.

Poison ivy rash usually appears linear, or resembling a straight line, as this is often the manner people inadvertently expose themselves to brushing the plant as they pass by. It is possible to spread the poison ivy rash if your hand or skin that previously came into contact with the oil then rubs against another part of your body prior to washing the residue off.

Symptoms of The Poison Ivy Rash

Poison ivy rash differs from those caused by fungi or mild contact dermatitis, as it often takes 1 to 2 days to fully manifest, and lasts for a number of weeks afterwards. You can identify a poison ivy rash by the following:

Treatment of A Poison Ivy Rash

The good thing about treating a poison ivy rash is the fact that it often does not require any specialist medication that needs a prescription to obtain, unless you experience a particularly bad allergic reaction that requires a visit to the hospital.

Besides that, much of the approaches to treatment can be done at home, and preferably instituted as soon as possible following exposure if you realize that you may have come into contact with it. Typical treatment modalities include:

It takes typically 24 to 48 hours for poison ivy rash to manifest, though if you came in contact with a significant amount of the oil, symptoms may appear sooner. Regardless, this gives you at least a couple hours to institute preventative treatment.

Thoroughly washing the skin first and foremost with gentle hypoallergenic soap and water does a great job of helping to remove a significant amount of the oil that may be in contact with the skin. Though this does not mean you will not experience any irritation, it can significantly help to reduce the amount of oil that comes into contact with your skin.

It is important to also wash any clothing or other material you may have had with you when the contact occurred in order to not cause a triggering of the allergic reaction the next time you use these items.

You can consume and apply topically to the affected areas a readily available antihistamine such as Benadryl to help reduce itching felt. Over-the-counter antihistamines are also sometimes used as occasional sleep aides to help overcome the irritation that may prevent you from getting rest.

Calamine lotion goes on wet, but rapidly dries to leave the skin with a white looking barrier that can significantly decrease itching and exudate that may ooze. Calamine lotion is one of the accepted mainstays in managing poison ivy rashes effectively.

These directly help to suppress inflammatory processes and can reduce itching to a great degree. Rarely, a physician may prescribe steroidal medication for you to drink if your reaction is particularly troublesome.

You can either make these at home or purchase a moisturizing cream that contains oatmeal in it. Oatmeal helps to suppress itching and soothes the skin, promoting recovery.

These are optional, but can be very helpful for helping to stop you from scratching the skin. Even though scratching the skin may feel good at the time, it does no favors for healing and will often just make things worse. Itching too vigorously may inadvertently break the skin and cause a secondary bacterial infection that will delay natural healing.

It is easy to say that the only way to avoid a poison ivy rash is to avoid the plant, but it is easier said than done. For instance, many people have no idea what they are looking for, and even if they do identification may be difficult to the untrained eye.

The best way to prevent the poison ivy rash is to come equipped for that eventuality. For instance, you should always wear long pants when going into strange territory, such as the forests or the bushes. This alone significantly cuts down your risk of developing a rash on your legs. In like manner, long sleeve shirts should be worn, along with gloves if you are likely to be in contact with vegetation.

Another popular option these days is to pack an urushiol blocking cream. Such preparations prevent the oil from being absorbed into your skin, acting as a sort of barrier to the allergen. These creams are especially helpful if you plan on going camping or hiking.

The majority of people that develop a poison ivy rash cope with it fine, even though some degree of discomfort is expected. After a few weeks, the rash resolves on its own, with the exception of a small number of persons who may have inherent allergies to poison ivy.

Following these simple guidelines will leave you well poised to never experience a poison ivy rash in your lifetime.