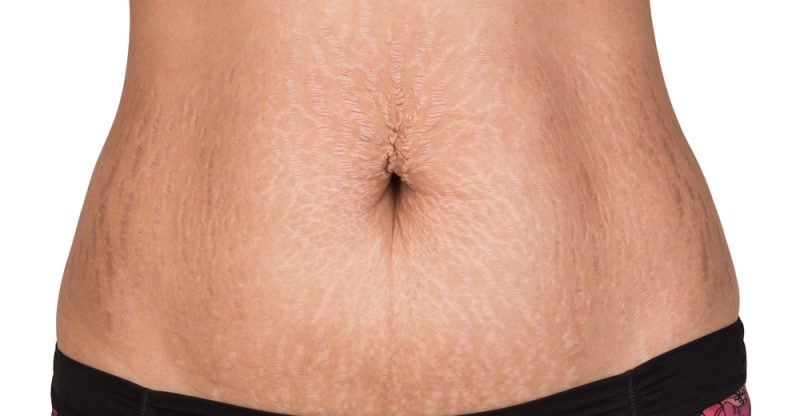 Stretch marks are a source of embarrassment to many people, even though they are really nothing to be ashamed of. They do not indicate a medical problem, but rather occur frequently during pregnancy, following large gains or loss in weight, with contributory factors being genetics and stress.

They can occur anywhere, but tend to occur mainly in areas that may have disproportionate amounts of fat, such as the abdomen (belly), thighs, arms and breasts.

Stretch marks occur in the middle layer of skin, known as the dermis, which is sandwiched by the top layer we see (the epidermis) and the deepest layer, the hypodermis (or subcutaneous layer). When someone changes size rapidly, the connective tissue found in the middle layer of skin is unable to match or accommodate these changes, and the result is damage to these proteins. Initially, stretch marks may appear reddish or pink in color, but after a while it takes on a typical silvery hue. Subsequent production of these proteins will likely also be damaged, and this is why there is no cure for stretch marks.

However, you can minimize the appearance so much that they are barely visible, which is a welcome change when you are frustrated with your inability to conceal them. Try these natural remedies to get rid of yours and make them invisible to the world:

How to Get Rid of Stretch Marks From Your Body Fast 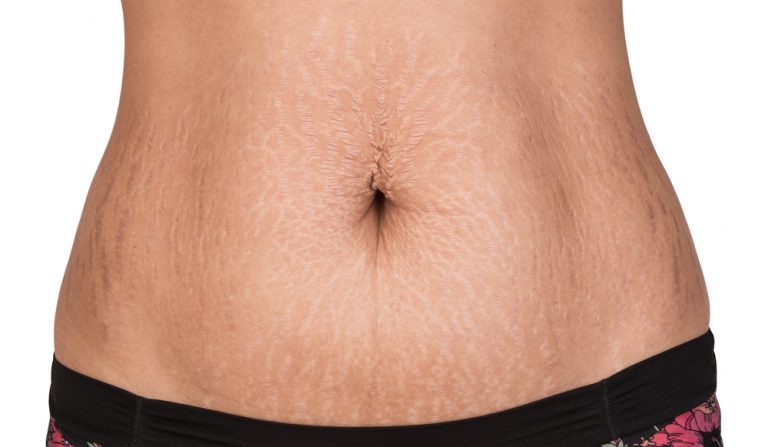 Cocoa butter is one of the most widely used and accepted ways to get rid of stretch marks, being available in liquid cream forms, or the pure product that is solid at room temperature. It is extremely hydrating, and makes skin measurably smoother and reduces the appearance of scars. Stretch marks are technically scars, and cocoa butter is an effective aid in reducing the visibility of them.

Shea Butter is regarded by many as cocoa butter’s little brother, since it appears to share many characteristics with it. Among these are its moisturizing and hydrating properties, not to mention its scar minimizing abilities. Plus, Shea Butter also assists with cell regeneration, which could help significantly reduce the appearance of stretch mark tracks or their vivid coloration.

Aloe Vera is no new Comer in the fields of skin health and beauty, but many people don’t understand how it helps to get rid of stretch marks. And while we have state that stretch marks are virtually impossible to cure, you can minimize its appearance to such an extent as to be deemed not existent. Its actions are made possible thanks to two compounds glucomannan and gibberellin, which promote collagen synthesis and repair of damaged skin. The end result is minimizing of the visual changes caused by stretch marks.

Castor oil is a common moisturizing agent used traditionally in many parts of the world. It also aids in management of various skin conditions and also falling hair or hair loss.  Castor oil contains a fatty acid ricinoleic acid, which significantly reduces the appearance of stretch marks and conditions the area to return it to its natural texture.

Vitamin E is one of the most commonly used and consumed vitamins for promoting skin health, thanks to its multiple actions. For one, vitamin E has anti-inflammatory and anti-oxidant actions, which buffer free radical damage and prevent worsening of stretch marks visibility. Secondly, it has a UV reflecting property that saves the skin from damage. But most importantly is its ability to speed up healing and minimize scarring. Stretch marks are basically scars, with reducing visibility one of the most common management modalities. For best results, consume vitamin E supplements every day and apply liquid oil to the stretch marks themselves to expedite removal.

While you can ground turmeric itself to make your own powder, it may be more convenient to just purchase ready-made powder. Turmeric, when made into a paste and applied to stretch marks helps to reduce the difference in skin tone between the two areas. Turmeric is reportedly able to fade stretch marks significantly over the course of a few weeks. In addition, turmeric has anti-inflammatory actions that benefit the skin as a whole.

Apple cider vinegar’s utility seems to know no bounds, and such is the case for its use in helping to get rid of stretch marks as well. Apple cider vinegar contains acetic and malic acid, which are useful for lightening scars. Apply some undiluted Apple Cider Vinegar before bed, and wash off and moisturize with a combination of the other natural treatments on this list, and your stretch marks could soon be a thing of the past.

Making baking soda into a paste and exfoliating the site of stretch marks is said to work for many, while not everyone testifies to its potency. In a manner similar to coarse coffee, exfoliating an area improves blood flow, and helps to remove the top most layers of dead skin cells. This could contribute to lightening of stretch marks over time, but is best used in conjunction with other therapies.

Vitamin A and its retinoid related compounds have been used for years as a heavy hitter in the acne space, being able to reduce signs of scarring significantly. Recently, these same Vitamin A compounds have shown extreme promise in getting rid of stretch marks, as they minimize the appearance of them significantly and promote collagen synthesis to replace the damaged structural components. Vitamin A plays a great overall role in skin health, so consuming more of it as well as applying a topical retinoid based product to the stretch marks themselves can go a long way in reducing the appearance. Just be sure to apply at night and wash off before going into the sun, or a nasty orange sunburn will ensue.

Collagen is arguably one of the most important structural proteins found in our body, helping keep skin elastic and resistant to unsightly changes. As we age, much of this ability is lost, so stretch marks become much more likely. Hyaluronic acid can help to stimulate synthesis of collagen, helping reduce the likelihood of stretch marks occurring. Couple this will Vitamin C and you have a potent cocktail for improving your collagen output.

Microdermabrasion is a new form of exfoliating treatment that goes much deeper than you can with granules alone, and is said to stimulate collagen synthesis in a much more efficient manner. It basically created micro trauma to skin cells which place a heavy requirement for regeneration to occur. It is a major player in reducing scarring, and is typically performed in a dermatologist’s office. It is one of the more effective treatments, but can also be a bit more traumatizing since bleeding may be involved.

Stretch marks can be minimized to give you back your confidence. It is important to note that fixing the structural deformities deep in the skin layer aren’t readily available, but frequent skin shedding and regeneration has a way of minimizing the appearance as new layers of skin are exposed. Try some of our suggestions above, and get rid of those stretch marks finally!

See Also
10 Tips for Dealing with Morning Sickness
How To Keep Aging Muscles Strong
Beginners Guide: How To Start Running
How To Get Rid Of Acne (Pimples) Fast