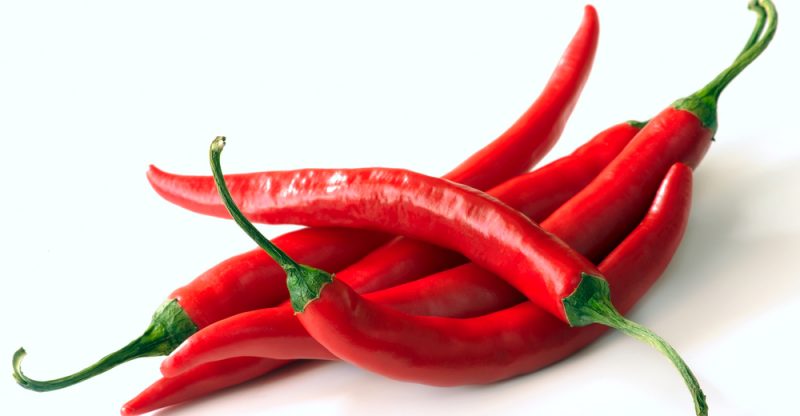 What is Chili Pepper?

The chili pepper, also known as Chile pepper in the Southern US or chilli in the UK, is a member of the nightshade family Solanaceae. Chili peppers are the fruits of the genus Capsicum plants. It is believed that chili peppers originated in Mexico; and from there journeyed to India, China, and Turkey until it was propagated across the entire world by Spanish and Portuguese explorers between the 16th and 17th centuries. Now it has become among the most in-demand commercial crops. According to the Food and Agriculture Organization Corporate Statistical Database or FAOSTAT, China currently produces roughly 33.2 million tons of fresh green Birds Eye chilies each year. Meanwhile, Peru is considered as the country with the most diverse cultivation of Capsicum plants. Varieties of chili peppers include Habanero, Jalapeno, Cayenne, Piri Piri, Fresno, etc.
Since its introduction, Chili peppers have become a staple in various cuisines. The chili pepper can be eaten raw, cooked, dried, or added as the main ingredient in powders and sauces. It heavily features its strong, spicy flavor. The chilies’ pungency is due to an active alkaloid called capsaicin. The more capsaicin it contains, the hotter the chili. However, the spicy heat of a chili pepper may still vary depending on its type and growing conditions. So what do chili peppers offer aside from spicing up mouth-watering dishes? 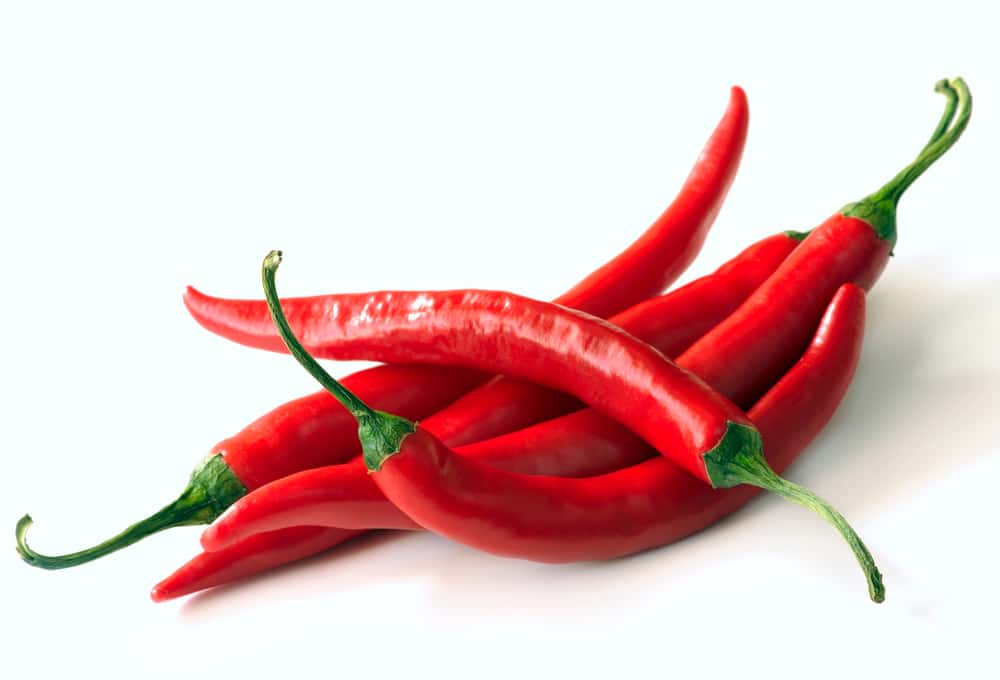 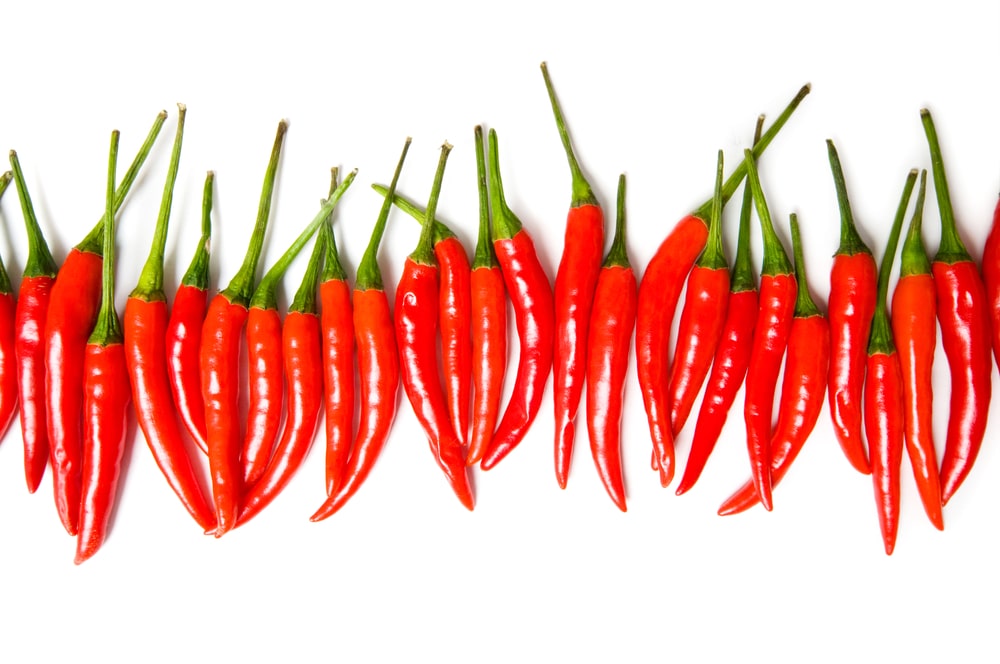 You need proper amounts of oxygen and iron for you to achieve and maintain good cognitive performance. Spicing up your meals with chili peppers everyday can decrease your chance of getting cognitive disorders like dementia and Alzheimer’s disease when you reach old age.

Anemia and fatigue are caused by iron deficiency. Chili peppers contain copper and iron. These minerals are vital for new blood cell formation.

Chili pepper is also rich in folic acid. Folic acid aids in the production of red blood cells and fights anemia. It also plays a vital role in rapid cell division and growth in pregnancy. Pregnant women must never undergo folic acid deficiency; otherwise it could lead to certain birth defects in newborns.

Chili peppers are also an excellent source of riboflavin and niacin. Niacin increases a person’s good cholesterol levels, also reducing the risk of cardiovascular diseases. Niacin deficiency can only lead to a disease called Pellagra. Pellagra is characterized by insomnia, dementia, and diarrhea.

Spicing up your meals with hot peppers is the first step you can take in preventing atherosclerosis.

Topical capsaicin is used to alleviate pain caused by for osteoarthritis and diabetic neuropathy. It works by desensitizing sensory receptors, and also possesses anti-inflammatory effects.

Spicing up your meals with hot peppers is an excellent first step in preventing atherosclerosis.

Capsaicin not only alleviates pain but also relieves congestion. Its fiery heat stimulates secretions that aid in clearing mucus from stuffy nose. Capsaicin has antibacterial properties that combat against chronic sinus infections, thanks to its ability to induce vasoconstriction in the blood vessels of the nasal cavity.

Chili peppers are often used as food preservatives because of its antibacterial and anti-fungal properties. Capsaicin can kill bacteria such as H. pylori and cure inflammatory bowel diseases.

The bright red color of chili peppers indicates its high pro-vitamin A or beta-carotene content. You can achieve about 6% of the recommended daily value for vitamin C with just a meager two teaspoons of red chili peppers. Vitamin A is vital in keeping a healthy respiratory tract, intestinal tract, and urinary tract. Vitamin A is also known as the anti-infection vitamin and serves as the first line of defense against infections.

We need vitamin A to keep our eyes healthy at all times. Including chili peppers in our regular diet, approximately one tablespoon each day, can definitely improve your eyesight. It also prevents night blindness as well as macular degeneration.

American Association for Cancer Research has stated that capsaicin has the power to kill leukemia and cancer cells. Just like turmeric, a spice used in making curry, chilies can inhibit tumor growth and cancer. Medical News Today has cited that Capsaicin might actually have the ability to stop breast cancer.

However, further studies are still required and is not yet declared as a means to fully treat cancer.

Chilies can actually prevent stomach ulcers. Red hot chili peppers kill bacteria that you may have ingested and stimulates the cells lining the stomach to release buffering juices. This is in direct contrast to the belief that peppers worsen the development or outcome of these ulcers.

Obesity is a serious health condition and must not be taken lightly. You can lose weight by eating chilies regularly with the inclusion of regular exercise, of course. Capsaicin is thermogenic. It reduces your cravings and increases your metabolism. The heat you feel after consuming chili pepper already takes energy and burn calories. Even cosmetic manufacturers have incorporated chili peppers in slimming lotions.

According to Jong Won Yun, a biotechnologist in Daegu University, people who have regular consumption of capsaicin have reported lower calorie intake and fat levels in the body.

Several researchers from the Chinese Academy of Medical Sciences have been observing the eating habits of roughly half a million Chinese people starting from age 30. They noticed that in a span of seven years, those who include chili peppers in their  diet six or seven times a week had a lower risk of mortality that those who do not consume these peppers on a regular basis. This could be due to the little known fact that chili peppers increase levels of IGF-1 in blood, an anti-aging hormone.

The next time you prepare a meal, add an extra spark with chili peppers. Getting a teary eye or a slight burn in your tongue can be all worth getting used to, especially when you can stand to benefit from such a long list of health benefits. Chili peppers are in demand in many parts of the world for two reasons: its fiery flavor and its positive effects to the body. It can effectively reduce blood cholesterol, platelet aggregation, and triglyceride levels among many others. Whether you like spicy food or not, chili peppers will always provide you an abundance of vitamins and minerals. In fact a chili pepper contains more vitamin C than an orange.

A few concerns may also tag along such as skin irritation and hypersensitivity in some individuals; but just make sure you wash your hands thoroughly and be cautious enough not to irritate your eyes. If you cannot handle the heat, drink a glass of milk. However, this varies on a case to case basis. Anything taken in excess will always bring more harm than good. So it is better to always use everything in moderation.