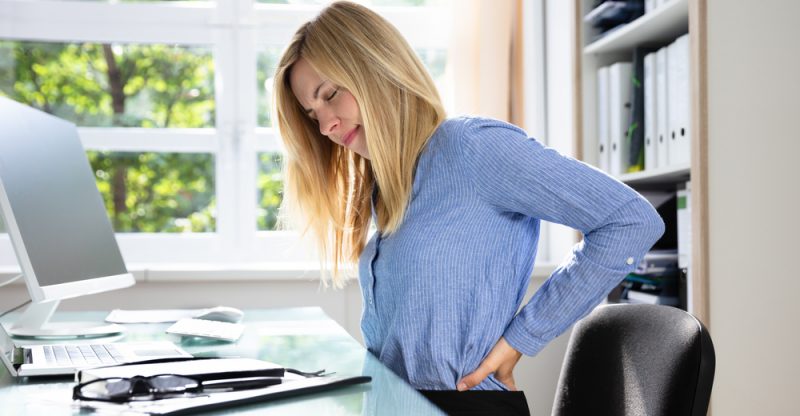 When you were a kid you probably got scolded more than a couple times for your poor posture; being told to sit and stand upright. Well, as it turns out your elders were right, as good posture can safeguard you from a number of conditions later in life, some of which you would’ve never thought possible.

But bad posture doesn’t just occur overnight – it has to be cultivated over years, due to bad habits, medical conditions and in some cases, just laziness. The good news, however, is that it’s never really too late to start fixing your posture now. Yes, it may require the use of certain specialized medical devices, especially if your slouching has significantly impacted your spine, but you can see changes by actively working to improve it.

When referring to symptoms of bad posture, it is more correct to refer to it as symptoms observed as a result of your bad posture. Yes, poor posture can cause ancillary symptoms to occur. These include:

One of the first symptoms you are likely to develop from bad posture is muscle pain. As you get older, this will manifest in the form of constant back, shoulder and neck pain, which you are likely to attribute to your mattress, to your job or even your genetics!

However, what bad posture does change is the natural balance of supporting muscles, in many instances so that one is over recruited, and the other (complementing) becomes compromised or weakened. The lower back muscles are often times the first to be afflicted.

Joint pains may manifest either before or after muscle pains, owing to the fact that unnatural pressure is exerted on these joints. The knees, hips, shoulders and neck may be the first to develop pain. Many persons that develop knee pain as a result of poor posture have no idea this is a contributing factor, as the knees are seen as an area far away from the spine.

A person with poor posture is often easily identifiable amongst a group of people, slouching either backwards or forwards. In one instance, the shoulder blades tilt forward, and appear hunched over, while in the other it is tilted too far back making it appear as if that person is about to fall. None of these positions places the spine in an anatomically correct position, and lends itself to development of other disorders later in life.

Placing abnormal stressors on joints hastens their deterioration, which occurs naturally with age anyway. The neck, knees and hips are amongst the first places to feel the effects of bad posture, contributing to the loss of mobility in a number of senior citizens.

While most people that see bad posture in action attribute it to that individual’s lack of fortitude, it is a common misconception. In fact, young persons with good posture are just as likely to develop bad posture at the job where they spend several hours seated every day, just as much as a person that developed it in childhood. Other common causes include:

Most of these conditions are congenital in nature, affecting children in their developmental phase. The result is permanent spinal deformity, explaining why scoliosis occurs with higher frequency in persons with these classes of disorders.

Injury, especially of the lower back is a major contributor to immobility and the development of bad posture, as standing erect may become a painful task.

In many cases, a person may think that their posture is just fine, when in reality weak supporting muscles distorts the spine in a manner not clearly visible to the individual.

Yes, even though standing upright is deeply embedded in our DNA, many times people do not realize the importance of sitting and standing upright, instead choosing to slouch uncomfortably over their smart device. Without a doubt, staring downwards into your phone for hours every day is not lending support to good posture and is a major contributor to bad posture related complications later in life.

Carrying a baby is not easy. You have likely seen a pregnant woman tend to lean her shoulders back, in an effort to balance the extra load from her belly. This is similar in appearance to a man with a potbelly, who can often times be observed with shoulders leaning back, arguably in an effort to maintain a stable center of gravity.

Being overweight or obese is a significant contributor to bad posture as well, placing immense strain on your spine and joints. Overweight persons are also more likely to be sedentary, adding another deadly blow to good posture.

Given that you haven’t developed osteoporosis or permanent spinal deformities, it’s not too late to start correcting your posture now. Small changes can lead to massive improvements in your posture over the long term. Effective ways of treating bad posture include:

Sensitization about bad posture and the importance of maintaining good posture has a positive influence on the overall prevalence of posture related disorders. Sometimes, especially in lower income communities, this simple change is enough to make a significant difference.

Many employers are guilty of providing substandard furniture arrangements for employees, not giving much thought to the individual’s health and well-being. Ergonomically crafted seating, along with workstations for computers can help to improve posture. For instance, keyboards that are too low cause slouching over or drooping of the shoulders in order to effectively type. Standing workstations are also exceptionally effective, given that you do place screens at suitable height.

Exercise helps to improve posture multiple ways, such as by assisting with bodyweight optimization, and strengthening of the muscles that support your spine. Exercise in older persons is also strongly advocated as a preventative tool against bad posture and related disorders.

Taping may seem a little brutish to many people, but remains an effective way of achieving postural correction. It involves using a stiff tape like material to wrap the upper torso with. Doing so helps ensure that the shoulders do not troop, instead supporting upright walking and seated positions.

If bad posture has progressed so much that early interventional techniques are no longer effective, surgery may be indicated to repair deformities that may have developed. This may involve implantation of metal rods adjacent to the spine that help keep it upright, or surgery to address nerve impingement or muscle atrophy as a result of compression.

Turns out our parents and grandparents were correct – teach kids the correct posture from a young age, and you reduce the likelihood of posture related injuries significantly later in life. Early interventional techniques are also extremely effective, given that you make an effort to do them.

Medications, while they can be used, do not address bad posture in any form or fashion, and may inadvertently cause you to develop a dependence on them for normal daily function.