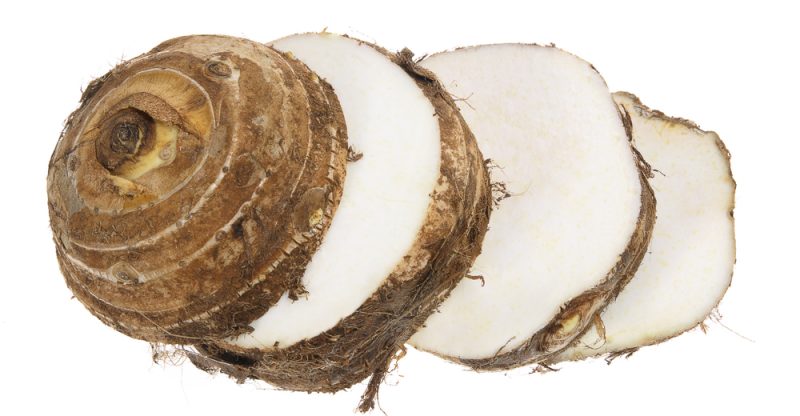 What is Taro Root?

Taro root is an incredibly common and important food across the world, being popular in cultures on 6 of the 7 continents (with Antarctica being the only exception). It is widely consumed for the various positive health benefits that it can bring and has generally been considered a health food long before its health benefits were scientifically explained. Taro is widely considered to be one of the first plants to be cultivated by humans. It is important to note that we are discussing the health benefits of the root (or corm) as many other articles have confounded the two, resulting in wild claims about the Vitamin A or Vitamin C content of taro root, which is simply incorrect. 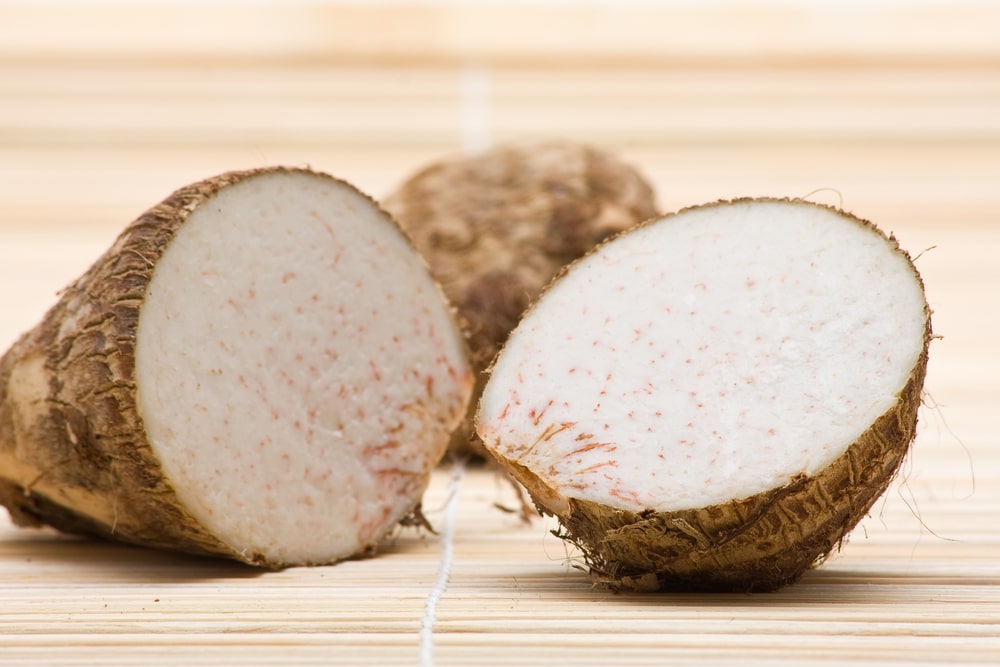 1. Improves The Chances of Dietary Success

The taro root is rather calorie-sparse at 142 calories per 100g – around 13% of the possible calorie content. The low-calorie and high “bulk” of tubers such as taro has made them a staple in diets across the world as they will reduce hunger and make you feel “full” without too many calories. For this reason, taro root can be an excellent food addition for those who are dieting, as one of the hardest parts of losing weight is getting past the feelings of hunger.

The taro root (or corm) is an incredibly popular carbohydrate source, with around 30g per 100 being digestible carbohydrates. The taro root is a starchy root vegetable with a similar profile to the common potato, though it differs quite markedly in terms of taste (with the taro being sweeter and slightly almond/nutty) and other nutrient levels.

Starches have received an unnecessarily negative press recently due to the rise of low-carbohydrate diets, taro root – along with other tubers such as the potato and sweet potato –  includes a large quantity of starch: non-sugar carbohydrates which provide a large amount of slower-releasing energy.

Taro root provides ¼ of your daily B6. Vitamin B6 is one of the less-discussed B vitamins but is essential for the proper digestion and metabolism of food, as well as enzyme production and facilitation. Deficiency in Vitamin B6 can result in poor absorption of nutrients and energy from food, reducing the efficiency of the metabolism. B6 is also associated with the processing, absorption and use of proteins, peptides and amino acids, making it an incredibly beneficial supporting nutrient for other compounds, as well as an essential actor in processes such as muscle growth, recovery and the repair of damaged tissues.

Vitamin E – 20% RDA of which is found in Taro root – is primarily an antioxidant, though it has a number of other small functions within the body. This means that, as an antioxidant, it is involved with the reduction of the risk and effect of countless diseases associated with aging and other oxidative stressors (such as prolonged aerobic exercise, for example). Defending against deficiency in vitamin E is essential, as it can cause various muscle disorders (myopathies), retinopathy and damage to the blood cells [3].

Taro root is incredibly high in manganese, especially compared to other tubers like potatoes and sweet potatoes – 100g will provide around 20% of the daily requirement for this trace mineral. Failure to consume enough manganese can cause iron malabsorption and damage to both the blood and liver. Combined with the effects of Vitamins E and B6, manganese provides excellent support for blood and cardiovascular health.

Manganese is also a necessary part of carbohydrate metabolism – especially the creation of glucose from other substances. Consuming enough manganese benefits proper energy transfer and exercise performance (especially in aerobic exercise such as long-distance running, rowing or cycling).

7. Good for Aerobic and Strength Exercises

11% of daily phosphorous can be found in the taro root. This mineral does not receive much media attention but is an essential part of the processes surrounding the production of ATP and the overall health of the “phosphogenic” or ATP-CP energy system that provides us with short-duration, explosive movements [4]. This means that taro is not only beneficial for aerobic exercise (as mentioned above), but also for the maintenance of the energy systems liked to maximal strength and power – these are essential for sports performance as well as proper health and quality of life as we age.

Potassium – often erroneously considered “the banana mineral” (it is found in higher concentrations in kale, for example) – is a mineral that has some very important functions in the body. Firstly, it is an essential part of cellular metabolism, being involved in the osmosis of nutrients and water across cell membranes, in combination with sodium. Secondly, potassium is one of the two main minerals associated with the health of bones and teeth – along with calcium [5]. Finally, potassium has positive effects on the health of the cardiovascular system, reducing the chance of serious heart problems and coronary heart disease – the number 1 killer in the English-speaking world.

Whilst not as plentiful in the Taro root as some other food sources, nor as plentiful as some of the other micronutrients, iron and magnesium are essential parts of blood health, cognitive function and recovery of damaged tissues. Iron is a mineral in which many of us are deficient and it has an incredibly difficult time being absorbed – making it crucial to ensure we are not deficient. Iron deficiency is most commonly associated with anaemia.

Magnesium is a common supplement for muscles, being closely tied to the excitability processes. It is also a universal co-enzyme, acting in over 300 enzyme interactions – with special importance in the development of energy at every stage in the process. The consumption of magnesium in combination with B6 will give us a large boost in terms of our enzyme production, health and function.