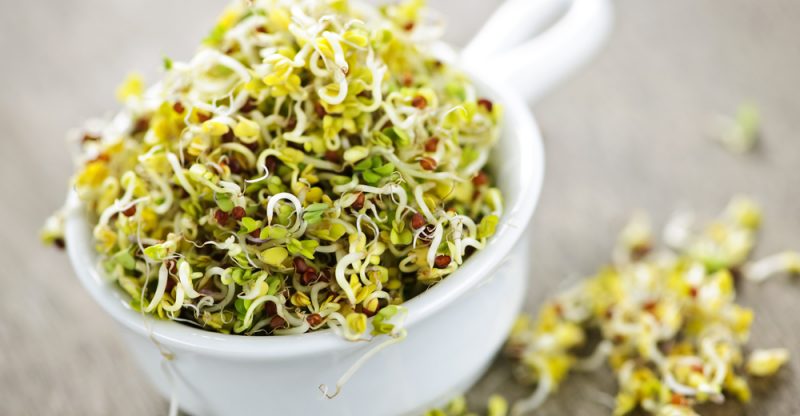 What is Alfalfa Sprouts?

Medicago sativa, more commonly known as Alfalfa Sprouts, is a flowering plant belonging to the pea family. Alfalfa is also known by its other names: Lucerne, Buffalo herb, California clover, Purple clover, and Spanish clover. The plant appears to have originated in the eastern Mediterranean and western Asian areas, where it has been cultivated for more than a millennium. It features tiny violet flowers when the plant reaches full maturity.

Back then, people used alfalfa as fodder to feed cattle in the form of alfalfa hay. Nonetheless, Ayurveda and traditional Chinese medicine had already been using it to treat digestive disturbances.

At present, people are consuming alfalfa sprouts to gain its numerous benefits on health. It was not until the 1970s that alfalfa was discovered for its other advantages apart from being forage. Alfalfa is hailed as “the father of all foods” because of its versatility and high content of bioactive plant compounds. 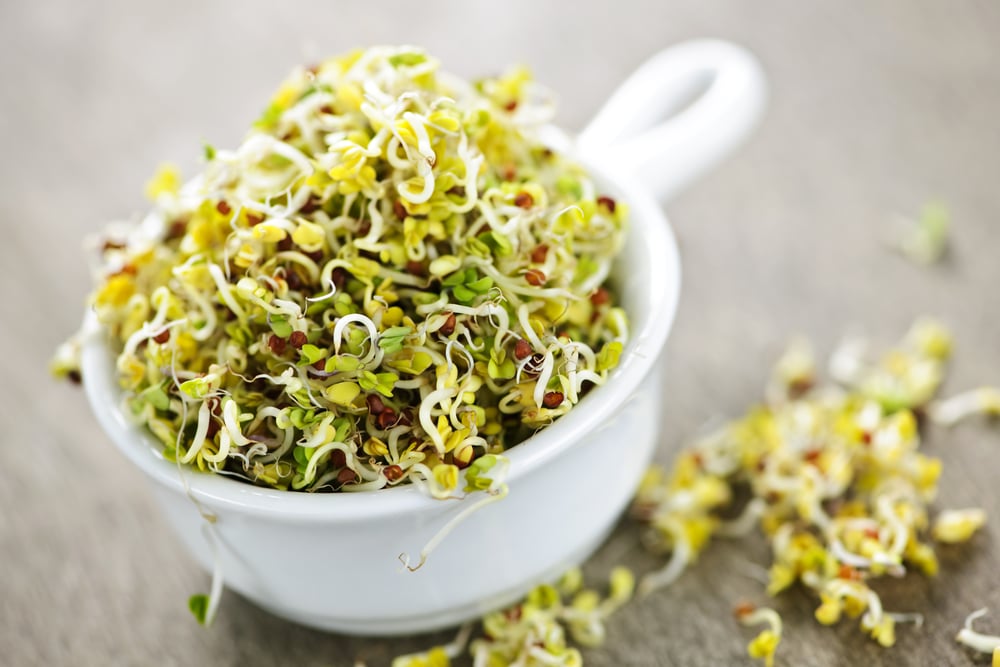 A cup of alfalfa sprouts provides 13% of the daily requirement for vitamin K. Men’s daily requirement for vitamin K is 120 micrograms and 90 micrograms for women. Vitamin K is a blood clotting vitamin; hence, habitual eating of at least a cup of alfalfa sprouts every day ensures you won’t have hemorrhagic problems in the future in case you find yourself injured or in need for surgery. Alfalfa’s high vitamin K content promotes fast wound healing and saves you from critical situations that may arise.

Alfalfa is an excellent source of iron and is more effective than iron only supplements. Significant amounts of iron, chlorophyll, and vitamin K present in alfalfa sprouts improves the production of blood and are beneficial in treating nosebleeds and bleeding gums.

Chlorophyll, the green pigments that give alfalfa its color, is a powerful substance noted for its healing and cleansing properties. It has the ability to detoxify the body and eliminate impurities brought by pollution. It also combats infection. Alfalfa sprouts have the ability to break down carbon dioxide and stall the reproduction of anaerobic bacteria.

In addition, alfalfa sprouts are rich in vitamin A and enzymes, which help improve skin complexion. It hydrates dry skin and keeps it smooth. Dry skin is among the most common skin problems today. Nutrients derived from regular consumption of alfalfa sprouts helps in the maintenance and construction of skin to keep it healthy and radiant, thanks to increased collagen synthesis.

Vitamin K is beneficial to bone health as much as it is in blood production. The activation of osteocalcin, the protein circulating in the blood, requires vitamin K. It also aids in proper calcium absorption to prevent osteoporosis or weakening of the bones, which exponentially increases risk of fractures.

Alfalfa sprouts are ideal for weight-conscious individuals. It is low in sugar, calories, and fat. On the other hand, alfalfa sprouts are rich in fiber and a decent protein source. Its fiber content inhibits the release of ghrelin, a hormone that triggers hunger; thus, filling you up and preventing you from snacking.

Alfalfa sprouts help eliminate the bad cholesterol from your body. It contains high amounts of saponin, a plant compound notable for lowering LDL levels and improving levels of the good cholesterol HDL.

Alfalfa sprouts are blood purifiers, preventing morbid conditions that involve infection. Traditional medicine can use alfalfa sprouts to address skin eruptions such as acne, chicken pox, eczema, and psoriasis to name a few.

With its detoxification properties, a daily dose of alfalfa sprouts would be beneficial to keep your blood clean as it assists in kidney and liver function. Blood poisoning, caused by accumulation of bacteria in the bloodstream, is often life threatening. You should seek medical attention immediately. Then again, it can be prevented with the help of blood purifying herbs such as the alfalfa, which also possesses anti-microbial activity.

Alfalfa sprouts are notable in addressing digestive ailments as well as tooth decay and inflammation. The “father of all foods” features a high ratio of digestive enzymes such as: lipase, amylase, coagulase, invertase, peroxidase, pectinase, and proteases. Each enzyme has its own function but together, they promote a highly functioning digestive system.

Moreover, eating alfalfa sprouts prevents indigestion and excess gas by supporting the proper digestion of food. Its digestive enzymes make it easier for you to breakdown carbohydrates, fats, and proteins that may otherwise cause an upset stomach.

In addition, alfalfa sprouts are high in potassium, which help reduce water retention in all parts of your body. Potassium is an essential electrolyte, which serves as a diuretic and reduces swelling caused by water retention. The primary function of potassium promotes digestive regularity that would be helpful for anyone suffering from chronic constipation.

Alfalfa sprouts have high concentrations of phytonutrients namely L-canavanine and chlorophyll, which help fortify the body’s resistance to infections. Its powerful antioxidants eliminate toxins and free radicals from the body, preventing further DNA damage caused by free radicals. The end result is improved phagocytosis of foreign microbes and resistance to disease.

Alfalfa sprouts can bring calming effects to the body, helping you cope up with stress and reducing anxiety. It can also promote sound sleep for insomniac individuals.

A Urinary tract infection is a painful and laborious disease. Home remedies such as alfalfa sprouts can treat urinary tract infection. It provides relief and speeds up bacterial clearance from the bladder or urinary tract. It is a natural diuretic, increasing urine flow and eliminating the UTI-causing bacteria. It is crucial that you address the problem as soon as possible to prevent the infection from spreading to the kidneys, or medical intervention would be necessary.

Alfalfa sprouts are alkaline foods, which can help to regulate your stomach’s pH levels. If you struggle in digesting food, your stomach has to produce more acid to breakdown food. As a result, you may suffer heartburn and acid reflux caused by high concentration of acid. Alkaline foods such as alfalfa sprouts decrease the stomach’s acidity and optimize its pH. This also reduces the likelihood of you suffering from a painful gastric ulcer.

Alfalfa sprouts are high in amino acids, which promotes hair growth. Including alfalfa sprouts in your diet will give you sufficient protein needed for healthy hair.

Similarly, alfalfa sprouts are rich in vitamin B1 and vitamin B6 that are beneficial for hair growth. It also helps in addressing falling hair and hair thinning. Likewise, silica is present in alfalfa sprouts. Silica is also notable in the prevention of baldness.

Alfalfa sprouts are also abundant in vitamin C, which aids in the improvement of blood circulation in the scalp and the antioxidant action in hair follicles, boosting collagen synthesis in the process.

Every part of the alfalfa plant has its own set of advantages. It is hailed as “the father of all foods,” benefitting both man and animal. Alfalfa sprouts are abundant in vitamins and minerals that are essential to the proper functioning of the body and prevention of a number of ailments. It would be wise to add alfalfa sprouts in your diet. Apart from its wealth of vitamins and minerals, alfalfa contains 14 amino acids, making it one of the most potent medicinal plants.