The fennel plant is known for having a pleasant aroma and it’s scientifically known as Foeniculum Vulgare. One of the wide uses of the celery-like plant is therapeutic because of the various nutrients it possesses. Its seeds are commonly used and are popular in South Asian and a lot of Middle-Eastern cuisines and delicacies incorporate the use of fennel.

What is Fennel Tea?

The nutrients that fennel is enriched with is no secret and preparing fennel tea is one of the common methods of benefiting from them. It’s prepared by using ground or fully crushed fennel seeds so that all the aroma and nutrients can seep into the tea. It has been widely used by many generations such as Chinese and western medicine.

The Greeks had used it for medicine and cooking far long before anyone else discovered its uses, and applied it to their daily lifestyle. At the time, it was used in various rituals and celebrations because it was seen as a symbol that represented nature.

No doubt, that the shape and size of fennel may be small, but its nutritional value isn’t something that is ever going to be disputed. It possesses many nutrients that provide our bodies with a variety of health benefits. 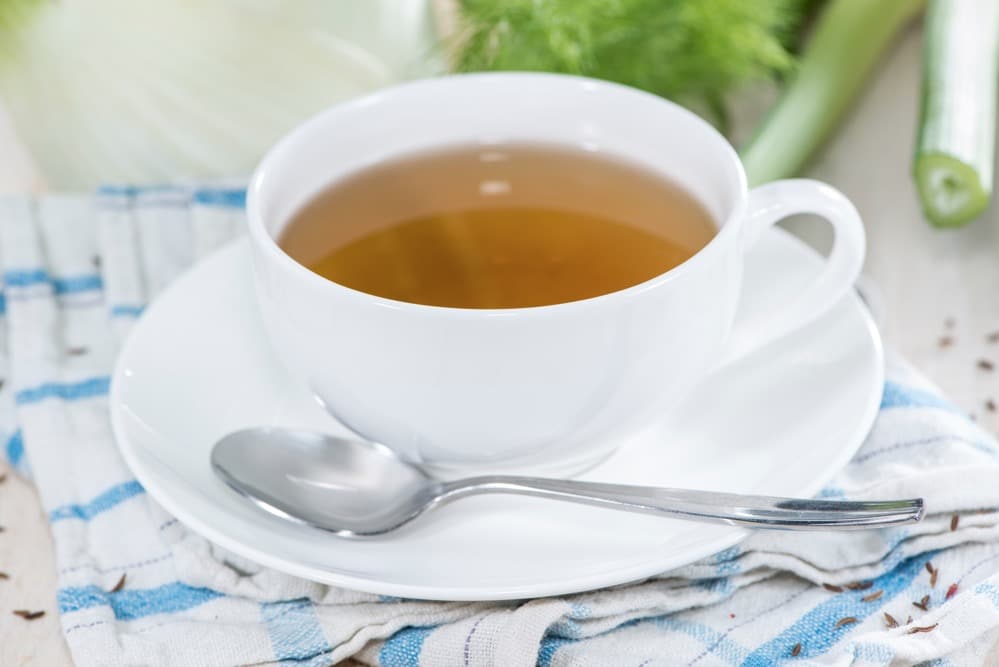 1. A Cure For Heartburn

Fennel tea is a commonly used in Asian countries as a remedy for heartburn. Preparing a cup of tea is simple and it’s enough to ease the pain and burn that’s commonly associated with indigestion. Heartburn patients have praised the capability of fennel tea to cure them of horrible symptoms and that now they no longer have to take any medication such as antacids.

Fennel tea contains all the volatile oils of the aromatic plant and these have mild qualities that mimic those of estrogen. This is a major reason why fennel tea is widely used in Chinese medicine to cure women of hormonal problems. It has also been found to be useful in relieving pre-menstrual symptoms like cramps and menopausal symptoms as well. Anethole is a main component of fennel tea, which is why it was widely used to protect the female reproductive system in ancient China.

Fennel tea has antispasmodic properties that make it useful in relaxing the digestive tracts by easing cramps and protecting the body against irritable bowel symptom. By inhibiting spasms, it allows the body to digest food easily. Another benefit of fennel tea is that it reduces the acid level in your digestive tracts and stomach, which can often become a breeding ground for parasites. By doing so, it rids the body of worms and bacteria.

Fennel tea hydrates the body and can contribute to healthy excretion of toxins from the body through urination. It can help in treating diseases such as jaundice and cleanses the liver so that it is protected against damage from alcohol. By cleansing the blood, it improves kidney function and prevents the growth of kidney stones.

One of the main results of drinking fennel tea is a reduction in water retention, which is instrumental in losing weight. It boosts the body’s metabolism and helps it burn fat faster, which results in reduced cellulite and a manageable appetite.

Fennel tea cleanses the body and eliminates the toxins that would otherwise accumulate in the joints, increasing the pain felt by arthritic patients. Thus, the pain is relieved so the tissues and joints become healthier.

Fennel tea can strengthen your immune system, which is crucial to help the body fend off attacks from viruses and bacteria. Drinking fennel tea protects the body against the symptoms of a cold such as a fever and sore throat. Moreover, It can treat many respiratory disorders such as asthma and bronchitis by clearing up congestion caused by excess phlegm.

Strain on the eyes due to working or studying too long or improper sleep can both have drastic effects. You may find yourself waking up to swollen and puffy eyes, which may even be painfully sore. In this case, a cup of fennel tea will be the perfect cure, but don’t drink it. Place it over your eyelids for ten minutes by soaking a cotton ball first. This will not only reduce puffiness, but it will protect your eyes against infections like conjunctivitis.

The liver is the largest internal organ and its function is equally significant because it filters through any unfriendly substances that enter the body such as alcohol. Fennel tea helps in cleaning up the liver, which is crucial for a proper distribution of hormones. Fennel can help the liver maintain hormonal balance this way, which in turn, relieves other symptoms.

Fennel tea can serve as the one-stop source of many vitamins and nutrients that are important for maintaining a healthy heart. Aside from this, fennel tea also contains antioxidants that can play a role in reducing unhealthy cholesterol levels. This leads to stable blood pressure and steer you clear of symptoms associated with hypertension.

It’s highly recommended to treat asthma issues and colds with fennel tea because of its microbial property, which helps it clear out respiratory tract infections.

The anti-inflammatory property of fennel tea helps treat the inflammation in your gums. Its aromatic quality can benefit you by acting as a breath-freshener. Also, the anti-bacterial properties of fennel tea can kill off any bacteria in your mouth whereby reducing the chances of a cavity development.

13. A Cure For Morning Sickness

Fennel tea is highly beneficial for expecting mothers because it will help in curing morning sickness and protect the body against infections in its weak state. Nursing mothers can benefit from the tea as well since it gives the benefit of inducing milk flow.

All in all, fennel tea is a highly beneficial and useful herbal drink that can keep the body healthy and youthful. It contains important nutrients such as potassium and many antioxidants which can keep your organs and skin youthful. You won’t suffer from joint, muscle or bone pain since it will clean out your body and system.