Even though noni juice have existed for centuries, it is only within the past two decades has it really exploded on the Western scene, where it is being used for the miraculous benefits on health. Its taste may take a little getting used to, but it is well worth it when you discover the healing benefits it possesses.

Sometimes known as the hog apple, or even rotten cheese fruit, Noni is indigenous through parts of Southeast Asia, where it was very commonly found growing among the extremely rich and fertile lands around volcanoes. Today, it is cultivated in many tropical regions of the world. Scientifically, Noni fruit is obtained from plants by the name Morinda citrifolia, best recognized as a yellow fruit when ripe that gives off an extremely pungent natural odor.

Did that stop the natives of the southeastern Pacific islands from benefiting from this fruit? Not at all. It has been used traditionally for at least many centuries, and possibly far longer than that. Noni juice is also rich in nutrients, and can help fortify a lackluster diet.

There are two ways to make Noni juice, via the traditional method that involves soaking the fruit in water and leaving exposed to sunlight for 6 to 8 weeks, or the modern approach which includes blending the fruit in water and consuming as is. The vast majority of available noni juice products that can be purchased commercially are made via the traditional fermentation process.

After being left to ferment for 6 to 8 weeks, it is then filtered to extract the liquid and heated in order to kill possible disease causing bacteria. 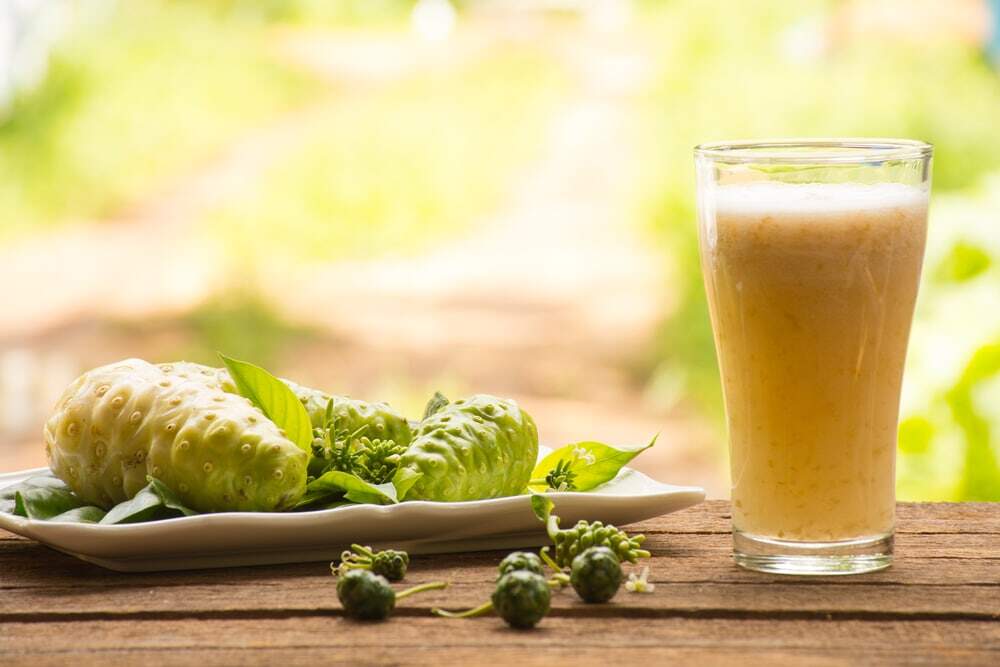 Gout is an extremely painful condition that results from accumulation of uric acid frequently around joints, where it causes inflammation, deposits called calcifications and sometimes difficulty with mobility. Noni juice has been used for centuries to deal with the management of gout (even though natives probably did not know what gout is), and today its utility in helping to relieve the symptoms is attributed to its inhibitory action on the xanthine oxidase enzyme system which plays a key role in the pathophysiology of gout.

While there is no definitive cure for gout, it can be managed with consistent use of the juice.

Noni juice is also great at helping to elicit muscular relaxation, much the same way that prescription medication can. It is believed that it helps to do this by blocking calcium channels that initiate muscle contraction on the cells, in turn blocking the ability of the muscle to contract. It can also help to alleviate the resulting pain that can be brought about from frequent muscle contractions and spasms.

One of the reasons Noni juice is frequently consumed is for its ability to reduce the likelihood of carcinogenic changes occurring. It is believed that Noni juice is able to block a key binding location that carcinogens interact with on DNA that then cause propagation of cancer cells. In addition to this, Noni juice also shows promise in halting the growth of cancer cells, at least when it comes to cancers of the breast. Overall, it is a novel way of dealing with cancer and might become a very useful tool in the fight against cancer.

Consumption of varied antioxidant rich foods is one of the primary ways to reduce your risk of cancer, but in the case of Noni juice it isn’t even the primary benefit of its antioxidants. Rather, noni juice’s range of antioxidants are very beneficial on many other diseases associated with heavy oxidative damage load. Think of premature aging, or inflammatory organ damage brought on by free radical attack. Noni juice is even able to shield heavy smokers from the excessive ravage of free radicals, which is significant as this segment of the population is exposed to much more oxidative stress.

In a manner similar to ginseng, Noni shows great promise as an adaptogen, which is something that is used to help the body adapt to stressors more efficiently. It is believed that ancient natives of the southeastern Pacific used this fruit to alleviate generalized weakness and fatigue, as it helped to bolster their energy levels. Noni is today considered an ergogenic aid as well, since it improves physical performance along with stamina and endurance.

Noni juice shows excellent potential in helping to improve your memory and also reduce the likelihood of you developing a neurodegenerative condition as you age. Apart from its strong antioxidant properties which prevent damage to neurons, it also enhances blood flow to the brain which can improve alertness and in turn memory. Noni juice may be very useful for promoting recovery following a stroke.

Noni juice may help to prevent the development of diabetes, specifically type II as it can help improve the utilization of glucose by cells, and enhance insulin sensitivity so that elevated blood glucose levels are not a common occurrence. Noni juice may also be of benefit to people with pre-existing diabetes, as it can improve HbA1c levels, which is a measure of relative glucose control over several months.

In every 15 ml serving of Noni juice you receive 2% the daily recommended intake of zinc, an important micro-mineral that regulates several processes related to immune health. Zinc is also necessary for a wide range of biochemical processes, and is known to stimulate white blood cell function. Not forgetting the modest vitamin C content the juice delivers, and you have quite a powerful punch in a serving just half of an ounce large.

Noni juice can accelerate the healing of wounds on the skin by stimulating collagen production. An increased rate of collagen production at the site of traumatic injury can also minimize scarring, and in turn pain, from reduced duration of exposure to bacterial contamination and accidental contact.

10. Benefit The Health Of Your Skin

Noni juice is rich with several vitamins that benefit skin health when consumed, but interestingly can also be applied as a great moisturizer. It is traditionally used to deal with eczema and psoriasis, as it promotes a retention of water in skin cells. You may want to use it only at night because of its offensive odor that may cause you to receive funny stares from strangers during the day.

Long before the advent of prescription antiparasitic medication, natives used Noni juice to treat infections caused by leishmaniasis. This parasitic infection is particularly prevalent in tropical areas (where noni is abundant), and is effectively remedied by daily consumption of the juice. Leishmaniasis is transmitted by tick and sand fly bites.

Consumption of Noni juice can help to enhance digestion thanks to its ability to slow down the rate of gastric emptying (the rate at which food leaves the stomach and enters intestines). By allowing food to spend a longer time in the stomach, it can benefit people with digestive disorders and reduce the likelihood of other disorders such as diarrhea.

Noni juice is as good as you would have heard of. Without a doubt, its taste and odor is not pleasant, but in just a small tablespoon serving you can experience immeasurable benefit.