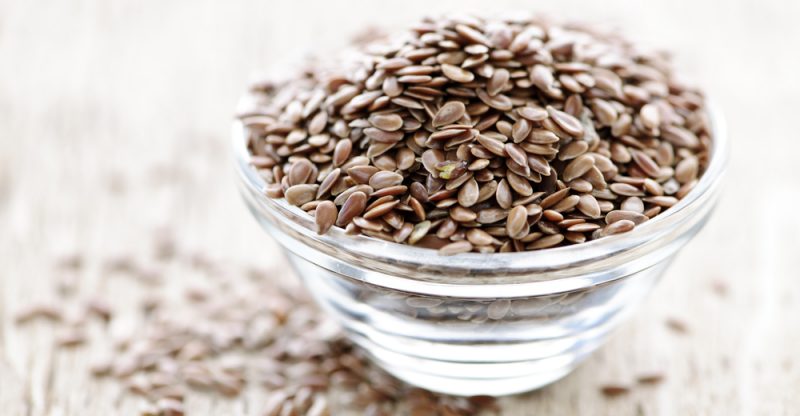 Flaxseed is exactly that: the seed of the domesticated forms of the pale flax plant. Flaxseed has been popular in recent years for many reasons, primarily related to its ability to provide individuals on a plant-based diet with a relatively large quantity of Omega-3 fatty acids. Flax seed is also incorporated into a wide variety of foods and food-stuffs due to the perceived health benefits and the versatility of both the seed and the oil to be included in other forms of carbohydrate products. It is also a form of chicken feed and is associated with high-quality chicken and eggs, meaning that there is clearly some importance in the quality of nutrients that flax contains.

In this article, we will discuss the health benefits and interesting nutritional facts that surround flax seed, discussing the current popular myths and hype surrounding the product. We will be using the USDA’s official statistics on flax seed [1]. 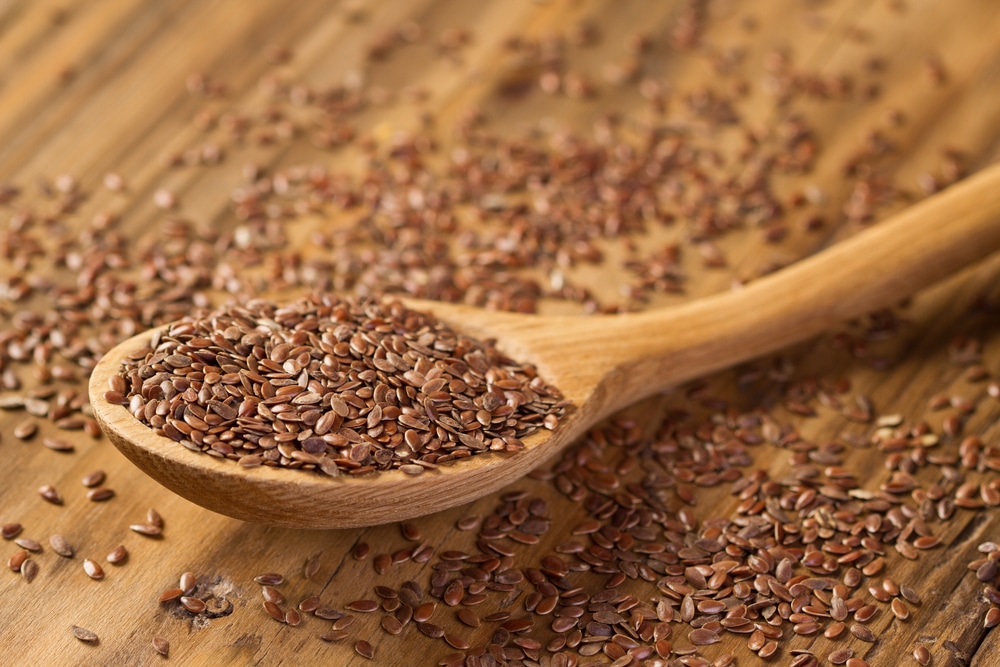 Flax seed is incredibly high in both soluble and insoluble fiber – an essential human nutrient and incredibly important for digestive, blood sugar and metabolic health regulation [2]. Fiber reduces the absorption of sugars into the blood stream, regulating blood sugar and the associated insulin-response, making flax seed an excellent food to be used as part of a responsible, low-carbohydrate diet for those who are struggling with Type-2 diabetes. Flax can also be ground into flaxmeal and used as a lower-GI (glycaemic index – a measure of the absorption rate of a food) alternative to traditional wheat and corn flours.

The consumption of Omega-3 fatty acids has been associated with the improvement of heart health through a variety of methods. Firstly, the reduction in LDL (“bad”) cholesterols and the improvement of HDL levels (“good” cholesterol) is associated with reductions in the risk of cardiovascular disease – the phytosterols found in flax seeds compound this effect [3]. In addition to this, there are some signs that Omega-3 consumption also lowers the levels of triglycerides in the bloodstream and improves heart health further.

It is important to note, however, that the consumption of Flax seed only provides ALA – a form of Omega-3 that is less beneficial than long-chain oils found in fish and other animal products. When we look at the uses of flax seed and its constituent nutrients, it is important to remember that this form can only be converted into longer-chain Omega-3 acids at around 5-15%. This means that, whist flax seed are a great source of ALA Omega-3 acids, they should not be the only source.

The Lignans found in Flaxseeds are incredibly helpful in the reduction of breast, uteral and prostate cancers. The reason for this is that Lignans are phytoestrogens: plant compounds that are effective at mimicking oestrogen in the body or having a role in its production/replacement. The increased oestrogen associated with consuming these Lignans has positive effects on bone health, but its main use is the reduction of cancers associated with a reduced oestrogen count – meaning it has a protective effect on many cancers that affect females disproportionately such as breast cancer and cancer of the uterus.

Aside from the general improvement of the blood lipid profile, the Lignans in flax have been shown to reduce the development of plaque and arterial wall hardening to an incredible degree. Whilst it is not sufficient to consume flax seed alone – a complete dietary and medical intervention is generally a wiser decision – it can be an incredible accompaniment to ensure the prevention and amelioration of arterial health problems.

Flax seed is high in manganese – an essential mineral for bone and blood health. Flax contains over 100% of the daily recommended amount of manganese and can be used to drastically increase the quality of blood health and bone health, fighting problems such as anaemia and osteoporosis.

The phytoestrogens found in flax also have benefits to the health of women who are currently going through the menopause or have already completed this process. The loss of the ovaries has a fundamentally-negative effect on the body’s production of oestrogen and this is associated with “hot flashes” which can be incredibly uncomfortable. The consumption of phytoestrogens has been shown to reduce the severity and regularity of these events.

As with many healthy plant-based foods, Flaxseed are incredibly high in anti-oxidant agents. The Lignans are anti-oxidant themselves but a variety of other compounds in flax seed have similar effects, making them a great food for the maintenance of health and general cancer protection – especially among those who perform intense, prolonged exercise such as long-distance running.

The phytochemicals, Lignan and Omega-3 found in flax seeds are all considered to be anti-inflammatory in some way. Omega-3 has been associated with universal anti-inflammatory processes, Lignan’s phytoestrogen status has a mild effect on the reduction of inflammatory process and the chemicals contained in flax are naturally effective at reducing inflammation and promoting proper recovery across a variety of tissues. This brings with it a wide variety of benefits, but generally means that a proper diet will be aided with the addition of flax seed, or flax seed oil.

Whilst the science is early, there are some indications that the consumption of flaxseed may be beneficial for those who struggle with Type-2 diabetes, beyond the simple effects of Omega-3 and dietary fiber on these processes. The Lignans themselves reduce the quantity of both glucose and lipids in the blood, reducing the risk of both diabetic/pre-diabetic blood sugar problems and the risk of hyperlipidemia.

Phosphorous is another mineral contained in huge quantities in flax seed. Phosphorous is essential for the maintenance of bone density and dental health. This mineral is also found in the vast majority of cells and consumption is necessary for proper overall cellular health. The combination of Phosphorous and the other compounds in Lignans make flax an excellent choice for the health of bones and teeth, especially in women and post-menopausal women.

Despite the health benefits associated with consuming a lot of flaxseed or oil, there are also some negative effects associated with consuming too much. For example, when eaten in large quantities the content of Cyanogenic glycosides – compounds which are metabolised in the body in a way that reduces the effectiveness of thyroid function, tied to the proper function of the metabolism. We may want to avoid consuming too many flax seeds, or focus more on the consumption of the oil which has a smaller risk of such problems.

There are some reports of Phytic acid, a compound found in flax seeds, reducing the short-term absorption of certain important minerals such as Iron (a mineral that many people are already deficient in). This means that the consumption of flax seed, whilst still healthy, should be distributed between different meals or consumed as snacks without other, iron-rich foods. This means that the way that we eat flax should be structured carefully for maximum health benefits and as few risks as possible.

There are also, finally, some concerns for some populations regarding the otherwise-healthy effects of flax consumption. For example, eating a large quantity of Omega-3 (beyond recommended doses) can have negative impacts on those who struggle with thin blood: the reduction of glucose and blood lipids is good for most people but for those with excessively low blood pressure, this is not necessarily advisable. The phytoestrogens are similar in this regard: whilst they are profoundly effective for women (especially post-menopause), they may have some negative side effects in men or pregnant women – the excessive consumption and conversion of Lignans and phytoestrogens can affect the hormonal balance in a major way. Caution is advised when consuming large quantities and those who are concerned about the health effects should always consult their physician!

Flaxseed or oil should be consumed in the diet of many individuals, especially those consuming a plant-based diet and in need of an increased Omega-3 intake. However, it does not benefit everyone equally due to the presence of phytoestrogens, and is preferentially-effective among females and particularly those who are currently experiencing menopause or are post-menopausal. The list of benefits are long but they are also conditional and should be taken seriously and structured to gain the maximum benefit: flax seeds should be consumed in relatively small portions, throughout the day and they should be carefully considered by those with hypotension or thin blood, pregnant women and those on a plant-based diet who are deficient in iron (especially hebe iron).