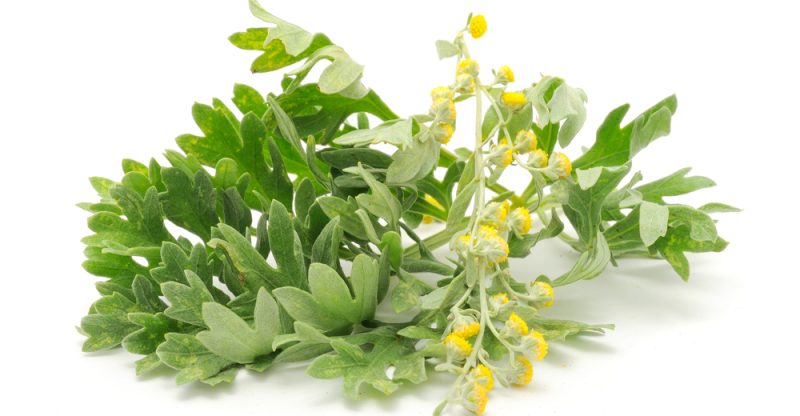 Artemisia absinthium is an ornamental shrub belonging to the Asteraceae family, and is more commonly known as wormwood. Wormwood is characterized by its greenish grey stems, silky silvery-white leaves, and yellow tubular flowers that bloom from early summer to early autumn.

Wormwood was native to the temperate regions of Europe and Asia before it grew wildly throughout the world. Today, wormwood can be seen growing on rocky slopes, along pathways, and even on barren soil.

Nonetheless, the health benefits of wormwood remain irrefutable. Wormwood possesses several medicinal compounds, which include anti-inflammatory, antimicrobial, and antioxidant properties. Apart from being used as the primary ingredient in absinthe, wormwood has been traditionally used to increase appetite, treat digestive disorders, cure fever, and much more.

Nutrition Info of wormwood (per 100 g)

Malaria is an infective disease brought by protozoan parasites that are passed on through the bite of an infected female mosquito. This serious disease has a high fatality rate as it invades human red blood cells, and especially when left unchecked.

Artemisinin, also known as qinghaosu in Chinese medicine, is an extract derived from the sweet wormwood. For centuries, Chinese medicine has been utilizing its potent effects against malaria and is presently the most effective malaria treatment. Its unique properties purge protozoan parasites in the blood.

So far, the World Health Organization recommends artemisinin-based medications for the fast treatment of this fatal disease.

SIBO, or small intestinal bacterial overgrowth, is the condition in which there is an increase in the number of bacteria in the small intestine. Bacteria from the colon that goes up towards the small intestine and can cause diarrhea, constipation, abdominal cramps, and excess gas, to name a few.

SIBO is a causative factor in liver disease and must be treated immediately. The conventional approach for SIBO involves the use of antibiotic drugs such as rifampin, vancomycin, metronidazole, and neomycin. However, antibiotic drugs have their own side effects- the benefits are short-term and it can eliminate the good bacteria needed for gut integrity. Hence, SIBO will reoccur.

Recent studies suggested that herbal therapies involving wormwood could eradicate SIBO in a manner similar to antibiotics. This is especially beneficial to SIBO patients who no longer respond to antibiotics, or need an alternative therapy to allow healthy gut repopulation with probiotic bacteria.

Narcotics have bad press among society, but just like deadly poisons and venomous snakes, narcotics also have their uses in medicine.

Wormwood has a mild narcotic effect, which can be used to relieve epileptic episodes, convulsions, and hysteric attacks. Wormwood is also helpful in relieving symptoms of stress and anxiety, and of course pain that has a neuro-muscular origin (nerve related cause).

It has been traditionally used as a tonic to stimulate appetite, which is vital following a bout of illness. The suggested amount to enhance your appetite is between 10 – 20 drops of wormwood essential oil infused into a glass of water, and consumed 15 minutes before each meal.

The wormwood tonic invigorates digestion and improves the absorption of nutrients in the body. This property of wormwood is especially beneficial to individuals who are coping with anorexia nervosa.

Dealing with mosquitoes is a major problem many people face, especially during rainy seasons. Mosquitoes carry several fatal diseases such as dengue and malaria.

The Journal of Agricultural and Food Chemistry stated that wormwood has potent antimicrobial activity against several types of bacteria including E. coli and salmonella.

Salmonella cause approximately 1 million food-borne ailments in the United States alone each year, with roughly 19, 000 hospitalizations and more than 300 annual recorded deaths. On the other hand, E. coli bacteria cause a variety of digestive and urinary health issues as well as pneumonia.

Wormwood is a natural antibiotic that can ward off these types of bacteria. A blend of wormwood, clove, and black walnut hulls can triple the anti-bacterial effects, and prevent these diseases from reaching critical stages.

Wormwood can eliminate fungi as much as it can kill bacteria. It can effectively inhibit the growth of a number of fungi including Candida albicans, which is particularly difficult to treat and is the most common type of yeast infection that can affect the mouth, the intestines, and vagina. In fact, wormwood has been used as an age-old remedy for fungal infections long before conventional medicine.

Crohn’s disease is an inflammatory condition affecting your digestive tract, which leads to malnutrition, severe diarrhea, fatigue, weight loss, and sometimes excruciating abdominal pain. Crohn’s disease can be life threatening if not addressed properly as the disease spreads deep into the layers of bowel tissue.

The exact cause of Crohn’s disease remains a moot point, and the cure for the disease remains unknown. However, natural remedies such as wormwood can greatly alleviate its symptoms and ease the pain it brings.

In fact, a double-blind study in Germany proved that wormwood could abolish the need for steroids in patients suffering Crohn’s disease, eliminating side effects incurred from those same medications as well.

Wormwood is an emmenagogue; a substance which helps stimulate menstrual discharges. The emmenagogue properties of wormwood are beneficial in preventing uterine tumors as it help open obstructed menstruation and regulate menstrual cycle.

Wormwood also possesses contraceptive properties, though we do not advocate its usage for that until a suitable standardized extract could be made for that purpose.

According to research, artemisinin is a natural alternative to chemotherapy for women with breast cancer. Artemisinin eradicates iron-enriched cancer cells analogous to the way it eradicates protozoan parasites that cause malaria.

A recent 2012 research tested samples of normal breast cells and cancer cells that had been treated to amplify their iron content. Subsequently, the cells were treated with artemisinin. After 16 hours, a majority of the cancer cells died while only a few of the normal cells were destroyed, offering a promising future for wormwood.

It has narcotic effects, and so it was used in alcoholic drinks to add flavor and to heighten intoxication in the past. Nonetheless, it has more to offer than just being an ingredient in alcoholic beverages.

Wormwood can be taken as a tea or tincture. However, it is considered unsafe taken in large amounts due to the thujone content of wormwood.