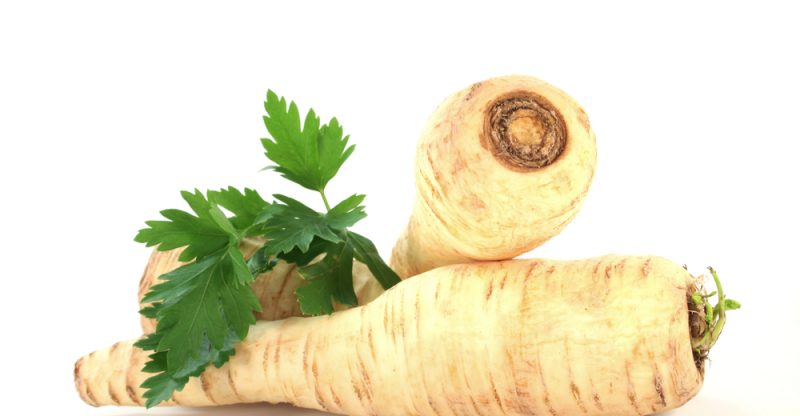 Parsnip is a vegetable used in food since ancient times. It is widely known for its use in the European Nations and is a famous ingredient in their dishes. Parsnips are considered to be very close to carrots and parsley. However, both the vegetables are known to have significant differences regarding taste. This vegetable has some nutritional benefits that make parsnips a healthy and tasty addition to different kinds of foods. Parsnips are rich in Potassium, Zinc, Magnesium, Phosphorus, Manganese, and Iron. It also contains many Vitamins and fiber along with certain amounts of protein and folate. The folate found in this vegetable is known to be very important in fighting chronic illnesses.

Due to the vegetable containing all the above mentioned important nutrients, it is highly beneficial to add the use of parsnips in our diet. In this article, we will be discussing eleven health benefits derived from using this vegetable.

The fiber found in parsnips helps the heart by reducing the cholesterol and its negative effects. Also, since parsnips are rich in potassium that helps in lowering the blood pressure and saves the heart from ill effects of hypertension. In addition to that, parsnips are also known to have low levels of sodium which makes them a perfect choice for people suffering from hypertension. Parsnips are also rich in folate that works towards decreasing the risk of heart-related issues.Folate also plays an important role in relaxing the blood vessels and thus improving the blood flow.

The amount of fiber found in parsnips makes them an excellent solution for people with digestive issues. This fiber helps regulate the bowel movement and reduces the chances of indigestion, constipation or any other related digestive problem. By improving the digestive issues, this vegetable helps remove toxins from the body.

Studies have shown that people who have a high intake of Vitamin C are safe from developing a lot of problems associated with the eyes. Vitamin C is vital for the eyesight, and the antioxidants help eyes from damage from the sun. Parsnips are rich in Vitamin C and enhance the vision significantly. To avoid developing eye issues, add parsnips to your diet.

To ensure proper growth and development of your baby, it is important to add folic acid to your diet. A lot of defects in the baby that occur during pregnancy are due to the deficiency of folate faced by many women. Parsnips, being rich in folate, offer a dietary way to increase the folate in your diet. Parsnips are also rich in manganese; a deficiency of manganese can result in abnormal growth and other developmental issues. However, both these deficiencies are not only restricted to pregnant women but can occur in anyone and thus result in serious consequences. To avoid the possibility of developing such deficiencies, it is a good idea to add parsnips to your diet that help you increase your intake of these important nutrients.

The manganese found in it along with zinc can greatly affect the bone health. A manganese deficiency has been seen to be linked with the occurrence of Osteoporosis. As parsnips are considered to be an excellent source of Manganese, adding them to your diet greatly improves your bone health. The anti-inflammatory properties of parsnips also help to reduce the symptoms of arthritis and to support the bones.

Root vegetables such as carrots and parsnips are known to have anti-inflammatory properties. These anti-inflammatory properties make them an excellent source to fight serious diseases caused by inflammation in the body such as cancer. The anti-oxidants found in parsnips can help people avoid the chances of getting cancer. In addition to this, they are considered to be helpful in preventing specific cancers such as stomach cancer and breast cancer because of the presence of folate in them.

Parsnips are also recommended to improve neurological health. The potassium found in parsnips causes you to become more alert and focused and thus boosts brain health. Furthermore, depression and anxiety are two of the major emotional disorders that the people experience in today’s world. Parsnips are said to be rich folate, which is considered to have a significant impact on people suffering from such emotional and mental problems. Thus, parsnips improve the overall neurological health of a person.

To fight the various illnesses, your body needs to be equipped with a strong immune system. Immune system requires certain vitamins to fight these harmful toxins. Another benefit of using parsnips in your diet is the addition of Vitamin C and other antioxidants found in parsnips that work great to improve your immune system. By building your immune system, parsnips also help you avoid some allergies.

For people looking to lose weight, parsnips are considered to be an excellent addition to their diet. Parsnip is known to be a low-calorie vegetable that is rich in fiber. The richness of fiber results in a feeling of being full and does not make you eat more. Also, parsnips also prevent you from snacking in the middle by preventing the hunger hormone from being released into your body. Parsnips, as discussed earlier, are also known for their effect on the digestive system that results in the digestive process in your body to be at optimal levels. By doing so, parsnips ensure the removal of toxins from your body and make use of the nutrition found in the foods you take.

The anti-inflammatory properties of Parsnips also help treat many respiratory problems such as asthma. The vitamin C in this vegetable also helps in fighting the respiratory infections and provides relief to people suffering from sinusitis, asthma, bronchitis and other respiratory illnesses.

Our research on Parsnips concludes that this amazing vegetable is packed with one of the most important nutrients. This makes parsnips an excellent addition to our dietary routines. The nutrients that are packed in this vegetable help fight chronic conditions and by adding it to your diet you can greatly affect the quality of your life.