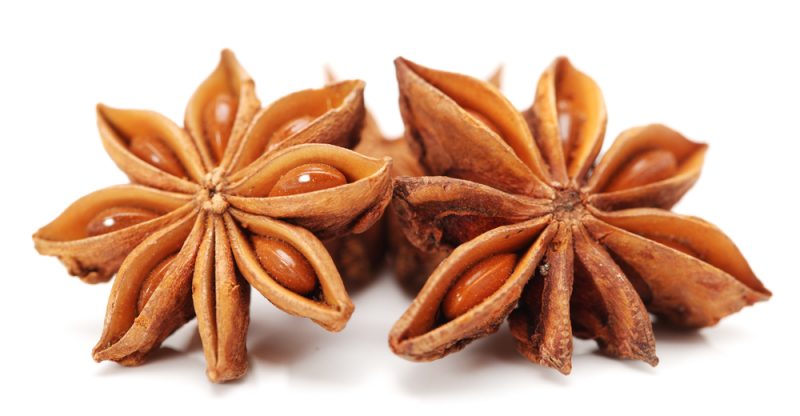 What is Star Anise?

Star anise is an extremely popular spice used throughout the world for its vivid flavor, adding a dimension of taste that makes many foods extremely exquisite. Also known as Chinese star anise or badiam, and carrying the scientific name Illicium verum, it is obtained from the fruit of an evergreen plant that is native to areas of south china and the northern areas of Vietnam, but is not cultivated in other southeastern Asian states.

Star anise is not the same as anise seeds (or aniseeds), though their flavors are the same, with star anise actually introduced as a lower cost alternative in many poor economies. But their similarities actually end there, as star anise has many different health benefits from aniseeds. Star anise is utilized widely in Asian cuisine, while aniseeds are used predominantly in western cultures.

Regardless, today both are used thanks to widespread availability and the willingness of people to experiment with flavors.

Though star anise is used as a spice, and rarely used in high quantities, it has significantly amounts of fiber in it that can be of benefit to anyone. You are likely to use only a little in your food, but when it comes to fiber, every little bit counts. Fiber bulks in the colon and along the intestinal tract, attracting water and preventing fecal statis. Fecal statis is just a fancy way of saying constipation, since the feces are unable to move anymore and harden and become difficult to pass. Water and fiber are essential for prevention of this.

2. Acts As A Mosquito Repellant When Ingested

Studies have shown that a compound found in star anise, anethole, functions as an effective insecticide outside of the body, but also when ingested. This is unique, since many repellants require application to the skin to work, but consumption of star anise helps you from getting bitten by mosquitoes and other insects, as it has insecticide properties. Regular consumption of star anise hence makes you insect proof, a welcome addition in tropical climates that have to suffer from insect bites year round.

New mothers sometimes have a difficult time producing milk following the birth of the newborn, especially if delivered via caesarean section or if it is their first child. At this time, remedies can be used to stimulate milk production. It is believed that the compound anethole shares a structural similarity to dopamine, which is known to inhibit prolactin release (and milk production). So, by dislodging dopamine and preventing it from doing so, milk production is increased.

4. Can Help Ease Symptoms Of Menopause

During the onset and following menopause, estrogen levels drop significantly and women experience the worst their bodies have to offer. While some women brave the storm, there really is no need to suffer, as estrogen replacement therapy is a valid option. In that same vein, foods that have estrogenic properties can also offer invaluable help in managing symptoms, such as star anise. Adding more of this spice to your meal, baked treats and even steeping in hot water and drinking daily can help ease your symptoms and make menopause less unpleasant.

5. Help Safeguard You Through Flu Season

While most fruits and vegetables (spices included) contain generous amounts of anti-oxidants which boost your immunity and reduce the risk of infection or sickness. However, star anise does all this plus a completely amazing other mechanism, thanks to the presence of a compound known as Shikimic acid. Shikimic acid is a critical pre-cursor component used in the manufacturer of the flu vaccine Tamiflu, and as luck has it, star anise has the highest concentration of this compound found in nature. This is why diets that use a lot of star anise in food preparation can significantly reduce your risk of flu this season.

Insomnia or sleeplessness can be as a result of many things, but many times stress and anxiety are the causes, in otherwise healthy people. This is because worry causes a rise in adrenalin levels, which causes a stimulatory effect and inhibits sleep. Star anise helps to modulate levels of some of these neurotransmitters and hormones, which in turn results in mild sedative actions. Consume some star anise tea nightly when going through a phase of poor sleep, and experience the difference.

The compound anethole found in star anise also possesses anti-fungal properties, which can be used topically (in the form of star anise’s essential oil) to treat infections of the skin, but also when consumed to help normalize the body’s candida colonies, found as part of the natural flora in women. When bacterial and fungal colonies go out of balance, vaginal yeast infections become commonplace, leading to discomfort and embarrassment. Star anise inhibits the excessive growth and multiplication of fungal organisms.

Star anise is extremely rich in iron, which as it turns out is commonly deficient in diets today. The result is anemia, poor oxygen carrying potential and lethargy. Regular consumption of star anise helps t initiate the production of more red blood cells, especially in conjunction with other minerals and vitamins. Circulation also improves as a result of increased numbers of red blood cells.

Star anise is rich in calcium, which is an important component of bone. Calcium deficiency results in development of osteoporosis, and accelerated bone loss. This is especially important in post-menopausal women, who are at far greater risk of suffering from falls and fractures since losing the protective effect of estrogen on their bones.

One of the key structural proteins in skin is collagen, which helps it to keep its integrity in place. Vitamin C is integral in the production of collagen, which can help you avoid the appearance of premature aging and wrinkles. Vitamin A found in star anise also helps to reflect some UV rays and reduces damage that could occur as a result of excessive exposure. Vitamin A can minimize the appearance of scarring due to acne or stretch marks, adding another dimension to the wellbeing of your skin.

11. Can Significantly Reduce Your Risk Of Various Cancers

Star anise is a treasure trove of rare phytochemicals, such as anethole, quercetin, coumaric acid and kaempferol, which have strong anti-inflammatory effects. By reducing the effects of oxidative damage on the cells, in turn the risk of cancerous changes occurring is minimized. Cancer is characterized by abnormal cell growth, and is thought to be precipitated by damage down to the cellular level.

Star anise is a valuable culinary ingredient that does much more than make food taste good, as it has notable effects on health as well. Do yourself a favor, try adding greater variety to your diet with star anise and your health will improve substantially, all from this little spice you can buy at your local market.