What is Sea Buckthorn?

The scientific name of sea buckthorn is Hippophae Rhamnoides. It is known to be a super food because not only is it enriched with all the omegas, i.e., 3, 6, and nine but it also has an abundance of omega 7. It has multiple benefits including boosting immunity, slowing the process of aging, making skin glow and host of other benefits that will be discussed later in the article. It has been used for medicinal purposes for over 12 centuries in China; presently, its use range from allopathy medicine to ayurvedic medicine.

Sea buckthorn grows on the heights of the Himalayas in a region called Spiti valley. It receives powerful UV rays because it is harvested at such a high altitude. It also comes across high temperatures, whether heat or cold and still survives, therefore it is known as a superfood. Some inhabitants of the valley also call it the ‘holy fruit.’

Sea buckthorn is a powerhouse of nutrients as it contains amino acids that are very helpful in making protein. With over 60 nutrients, 20 of which are minerals, sea buckthorn rules the nutrient-enriched fruit family. It has also had A, E, C, K, B1, and B2 vitamins. Great amounts of folic and healthy fatty acids are also present in this fruit. Sea buckthorn also contains the goodness of xanthophylls, carotenoids, flavonoids, and phenolics. 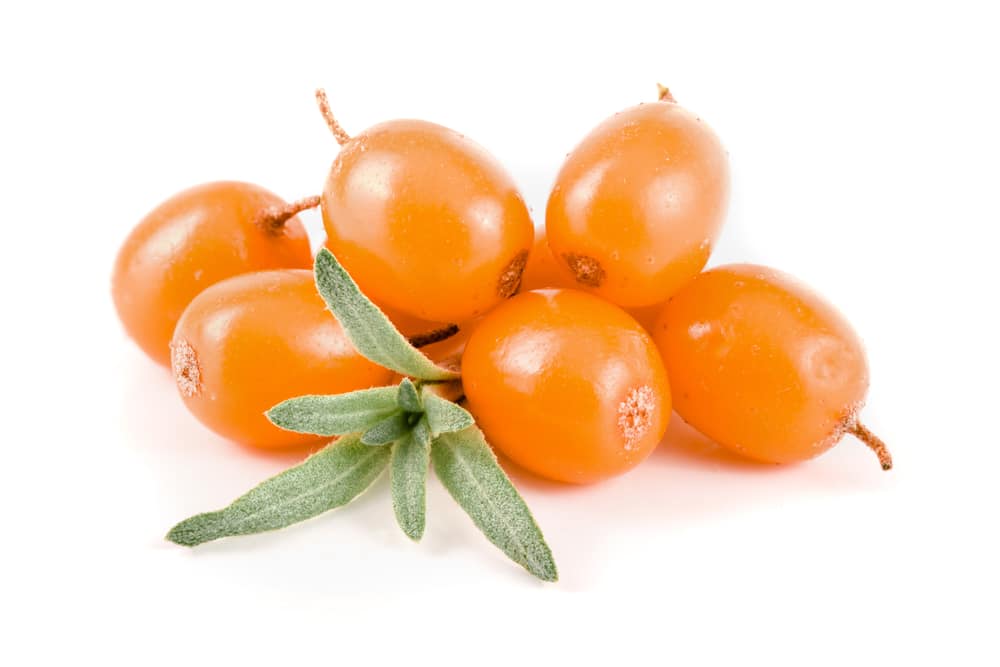 A research conducted on mice showed that leaf extract of sea buckthorn protected them from chromium induced oxidative stress the stress was caused by a chemical known as sodium nitroprusside and the alcoholic properties of sea buckthorn leaves protected them from the oxidative stress. Other chemicals in the leaf extract were observed to slow down the process of the free radical generation which also alleviated stress.

Sea buckthorn juice is found to combat cancer cells even at the micro levels of genes, sperms and bone marrow. Another study conducted on mice showed that sea buckthorn extract fought with tumor growth in the skin and stomachs of mice.

A groundbreaking statistic was found later in which sea buckthorn extract was seen to enhance the average life expectancy of mice from 195 days to 270 days by lowering the growth of cancerous and tumor-related cells.

A study was conducted on 50 patients with liver cirrhosis. The extract of sea buckthorn was found to reduce the severity caused by the disease in over 30 patients of the group, roughly making it over 70% advantageous in the cure of liver-related diseases.

Scientists gave seeds of sea buckthorn to mice that were eating sugary diet. The result showed a considerable decline in their high blood pressure levels. The seeds were also observed to lower down the heightened blood sugar levels as well as fat levels in the blood of the mice that the researchers used in their research.

The effectiveness of sea buckthorn plant oil was observed in the wound healing of burnt patients. The oil was applied on to their skin by soaking their bandages in it before application. People have seen surprising regrowth of the skin cells along with increased relief from pain by applying sea buckthorn oil soaked bandages on the burnt areas of the patients. The extract was observed to enhance the protein production and reduce the wound size quickly thereby speeding up the process of healing.

Injecting the extract of sea buckthorn was also found to heal the muscles of rats that had tendon injuries speedily. It does so by enhancing the production of protein and promoting fiber alignment in the muscle.

Scopolamine is a drug which when induced, cause brain destruction in rats. Sea buckthorn leaf extract was shown to lower down the damage caused by the drug. It was also found to protect the brain against oxidative damage.

Salmonella typhi, Escherichia coli, Shigelladysenteriae, Staphylococcus aureus, and Streptococcus pneumoniae are all types of bacteria.   Sea buckthorn leaf and berry extracts are shown to stop the growth of all these bacteria along with showing antibiotic effects in response to MRSA bacteria.

Sea buckthorn extract has been found to significantly improve the heart’s ability to resist heart stress along with preventing body fluid leakage into the lungs.

Sea buckthorn extract has high antioxidant properties that are highly beneficial in preventing heart damage while maintaining the structure and proper chemical composition of the heart. It has also been found to dramatically reduce the clotting of white blood cells thereby reducing the chances of cardiac arrest, stroke and other heart diseases.

Sea buckthorn oil was observed to increase the thickness in the skin of mice and fill up the deep fissures in their skin by speeding up the healing process. The properties in sea buckthorn are found to be helpful in a host of skin related problems including treating skin dryness and making it smooth, slowing the process of aging, treating sun damage and curing frostbite, and soothing irritation.

Pregnant women and individuals prone to allergy must consult a qualified professional before using the sea buckthorn.