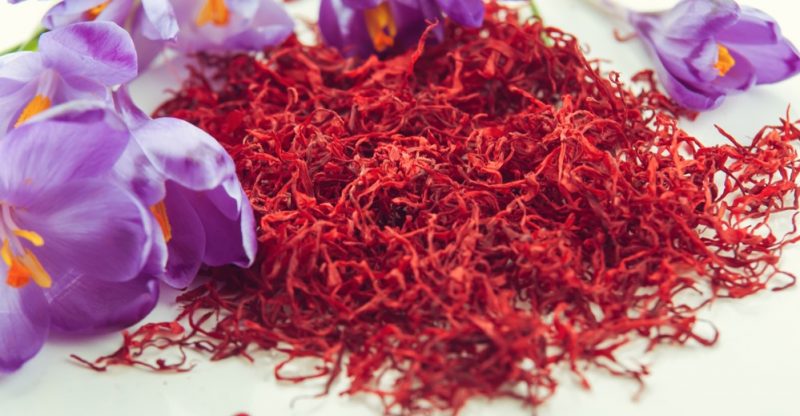 Saffron is a spice derived from the saffron rose, a perennial plant related to the lily, also known by its scientific name Crocus sativus. Crocus means thread in Greek, referring to the appearance of its stamens; while saffron is derived from the word safra, meaning yellow in Arabic. Saffron is among the world’s most expensive culinary ingredients. This special spice has been around for a thousand years and has a plethora of uses. It is indigenous to the bare and treeless terrain of Greece before it became propagated throughout Europe, Asia, and North America.

Saffron is a labor-intensive crop which makes it so expensive. It has three delicate crimson stigmas in the center which are handpicked, placed on a riddle, and cured over heat to amplify its flavor. It thrives best in warm, humid climates. Iran is the world’s largest supplier of saffron to date. Apart from its unique earthy essence, the health benefits of the saffron what makes it a highly priced spice. 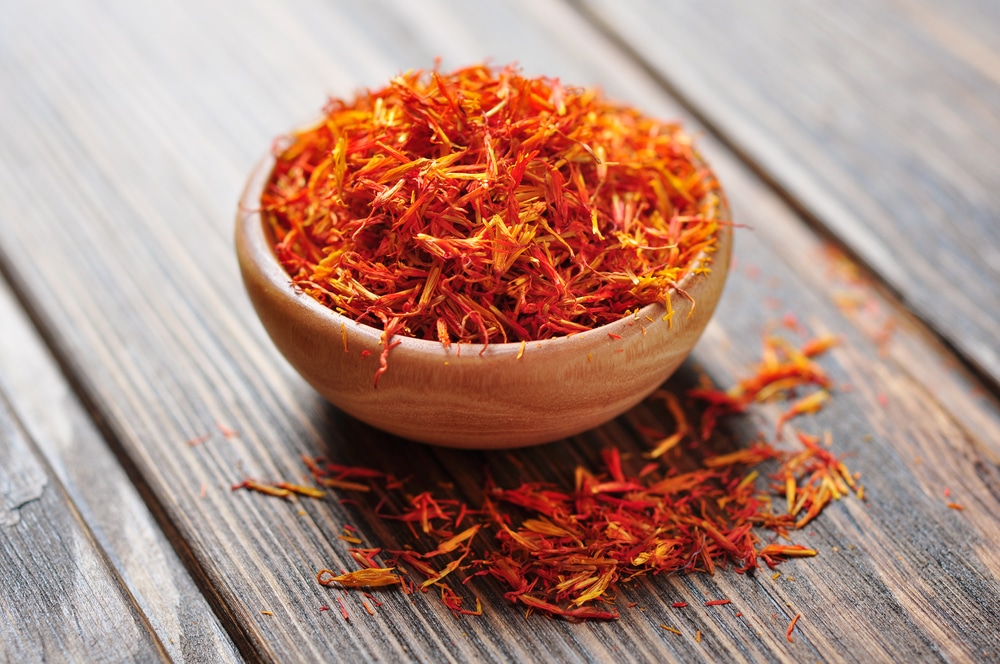 Mental stimulation is among the health benefits of saffron.  Various studies have shown that the stigma of the plant, the actual saffron, and its petals have similar mood benefits as antidepressant drugs. Safranal and crocin, two compounds present in saffron, regulate neurochemicals such as dopamine, serotonin, and norepinephrine which help reduce symptoms in mild to moderate depression even without conventional psychiatric medications. In fact, a two-month trial of 40 depressed individuals was conducted in Iran. Random patients were assigned to take 20 mg of Prozac per day while others receive 15 mg of the saffron rose petal twice daily. Researchers found that saffron has similar effects with the antidepressant drug. It affects the endocrine system and helps reduce stress and anxiety. Since ancient times, people have been using saffron to relax the mind and promote peaceful sleep due to its sedative properties. Moreover, saffron promotes learning and memory retention.

Meanwhile in Japan, it is encapsulated and is used for treating memory loss and Parkinson’s disease. Crocin helps prevent age related mental degradation such as Alzheimer’s disease.

Macular degeneration, America’s leading cause of blindness, is an age related condition caused by degenerating cells in an area of the eye known as the macula. Crocin and crocheting found in saffron can help prevent cell damage and delay age related decline to the cells of the eye as a whole.

Antioxidants present in it has anti-aging properties; thus, keeping the skin supple and radiant. Topical application of saffron can also whiten the skin, prevent acne, and fade scars, dark spots, and other skin blemishes. Saffron also has vitamin B2 which helps to heal chapped lips.

It helps prevent hair from falling by strengthening each strand from root to tip. Saffron combined with licorice milk is an excellent hair tonic in treating alopecia and inducing hair growth at a faster rate. Saffron is also believed to improve blood flow to the follicles, allowing greater delivery of nutrients and oxygen.

It can cure coughing and the common cold. It acts as an expectorant which loosens the phlegm from the lungs and throat. Saffron also has the quality to act as an anti-inflammatory substance as well as a stimulant. Both qualities are beneficial against asthma. Asthma attacks occur only when the respiratory tract has been narrowed down due to inflammation, and saffron can prevent that.

This spice is a well known sexual enhancer. A glass of milk with a pinch of saffron every night is all you need to increase your libido (according to anecdotal reports). Saffron has the capacity to increase vitality even in older men. Most importantly, it helps in erectile dysfunction, prevent infertility and premature ejaculation. Likewise, saffron is a powerful aphrodisiac for women due to its impact on the endocrine glands by improving androgen levels.

It’s pain relieving attribute is among its most valuable asset. It’s volatile compound safranal act as a sedative and help cure toothaches. Saffron also has antiseptic and sedative qualities, making it ideal for teething babies and for those who need to improve their sleeping patterns. It is commonly used by natives of countries where it is cultivated as a natural sleep aid, as well as a nervous system relaxant to calm over firing nerves that lead to pain.

Premenstrual syndrome or PMS is caused by various hormones wreaking havoc at the same time. Saffron can influence the endocrine system to a certain extent and stimulate the release of certain hormones (or neurochemicals to be more precise) beneficial in managing PMS such as serotonin. Serotonin is known as the happy hormone and help to reduce the severity of a woman’s mood swings. Saffron also has an estrogen like effect, which helps prioritize blood flow towards the pelvic area during pregnancy, and is useful in helping girls with delayed puberty mature.

9. Good for the Heart

It is rich in potassium, a key element in maintaining a healthy heart. Potassium dilates blood vessels and arteries, allowing blood pressure to decrease; thereby preventing atherosclerosis, heart attacks, and strokes. Moreover, saffron contains crocetin, a compound with the ability to regulate cholesterol levels, making it an extremely versatile spice for the wellbeing of your heart.

It is also known for its efficacy in treating upset stomachs and flatulence. It also helps in managing enlarged liver and spleen. It is also an anti-spasmic agent, and help remedy constipation and bloating from a variety of causes.

Volatile compounds in saffron can effectively neutralize free radicals that can cause cell degeneration. Saffron contains more or less 150 bio chemicals including antioxidants, carotenoids, crocin, and safranal which are all beneficial in promoting cell growth and cell repair. Saffron contains high amounts of potassium and magnesium which constitute one of the health benefits of saffron. This amazing organic composition of saffron makes it a powerful preventative against cancer, and helps maintain optimal DNA synthesis and replication of cells.

Saffron is currently the world’s most expensive spice and is highly praised for its versatility. It has a plethora of uses ranging from textile dyeing to enhancing dishes with its unique culinary properties. Most of all, saffron is highly prized for its numerous health benefits, even though the amount usually consumed does not allow for adequate dietary amounts to be met.  Regardless, it contains more than a hundred bio chemicals including its most prominent elements manganese, iron, and potassium. It is also abundant in antioxidants. Saffron promotes physical, respiratory, mental, and hormonal benefits among many others. Saffron is unquestionably a treasure trove of health benefits which makes this luxurious spice worth every dime and effort spent on it.