Vitamin B12 is immensely important for the body’s systems and their respective functions. Statistics show that a deficiency of vitamin B12 is one of the leading health issues in impoverished parts of the world such as those in South America and areas in Africa.

The essential nutrient impacts mood, levels of energy, cognition, and memory along with various other parts of the body. It was also instrumental in reducing fatigue, which was the effect of increased levels of adrenaline in the system. Moreover, it maintained several metabolic operations such as the production of enzymes, secretion of hormones and the process of DNA synthesis, which are imperative in regulating the cardiovascular and nervous system.

Because of its crucial role in the body’s functions, a deficiency in the body can surface in the form of painful and uncomfortable symptoms. These include feeling tired easily and signs of mood disorders such as depression. A deficiency can be detected in its later stages when symptoms start to occur; otherwise, early detection is possible through a blood screening. Vitamin B12 is present in foods that are mostly derived from animals. Plant sources do not contain it unless they are genetically modified to do so. Here are some benefits that you get by eating foods rich in vitamin B12.

11 Amazing Health Benefits of Vitamin B12 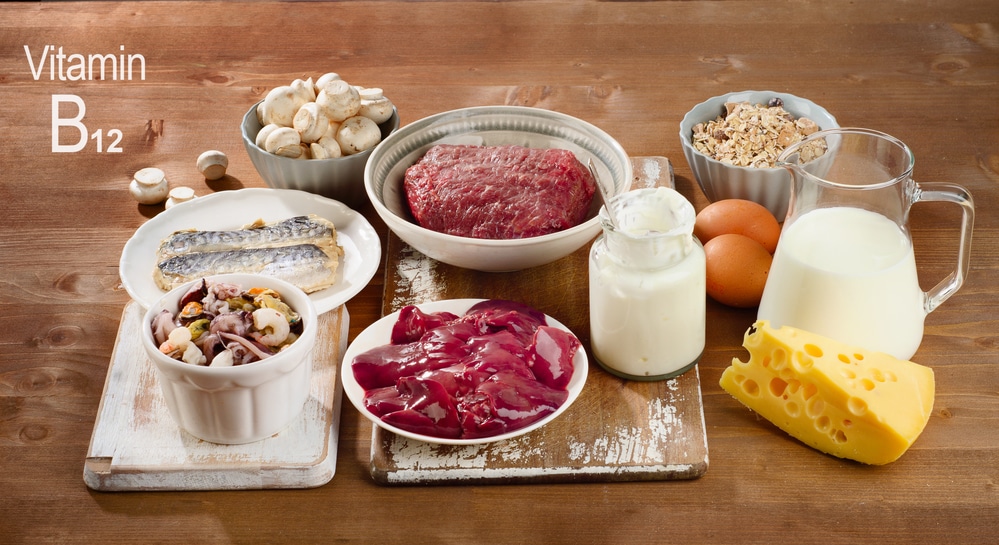 It is highly beneficial for the metabolic processes that take place inside your body. This is because of its role in converting complex carbohydrates into simple glucose chains that are used by cells to gain energy. This explains why excess fatigue is often discovered to be the result of a vitamin B12 deficiency. The nervous system requires vitamin B12 for effective signaling by neurotransmitters for when the muscles need to contract. This mechanism is what allows your body to do the simplest of tasks without feeling exhausted so quickly.

When the body lacks adequate vitamin B12 content because of insufficient intake, then the nervous fails to keep up with the demanding cognitive processes. As a result, neurologic and psychological interference will hinder cognitive development. The importance of vitamin B12 for the cognition is to prevent the nervous system from degenerating. This highlights its importance in reducing the risk of developing Alzheimer’s disease, which is characterized by chronic memory loss.

Vitamin B12 is highly regarded as the main constituent of a diet that has the ability to regulate the nervous system. By doing so, it reduces chances of you developing any mood disorders such as depression and anxiety. Also, it is instrumental to produce certain compounds that help the body deal with high levels of mental stress and maintain neurological functioning.

Heart disease is a major health concern that is faced by developing and developed countries alike. This is an important consideration since vitamin B12 is beneficial for a healthy cardiovascular system as well. Increased homocysteine levels are harmful to the body since they can damage the blood vessels and cause fatal diseases such as venous thrombosis or atherosclerosis. Vitamin B12 plays the part of regulating the levels of this hormone in the blood since it is produced whenever amino acids are broken down.

Because of its role in metabolic processes, it goes without saying that cell production falls under the jurisdiction of vitamin B12 too. Since hair and skin are the results of healthy cell production, it’s safe to say that vitamin B12 has a positive impact on it. It improves the skin by reducing unhealthy signs such as redness, excessive oil/dryness and inflammation. A healthy intake of foods that contain this nutrient leads to less hair breakage and stronger follicles. By doing so, it ensures prevention against premature balding.

Due to the importance of vitamin B12 for DNA synthesis, it is a vital nutrient that ensures the healthy development of the baby. Their mental and physical growth is maintained because of healthy levels of vitamin B12 and folate in the mother’s body. Because of vitamin B12 constantly collaborating with folate, the chances of birth defects forming are lowered. Furthermore, it becomes increasingly helpful for expecting mothers during their last few months because it helps them carry on activities without becoming too exhausted since their weight increases drastically.

Another role played by vitamin B12 is that it helps in the production of red blood cells which carry oxygen through the blood. A low red blood cell count can mean the development of a painful disease such as anemia which is characterized by chronic fatigue and becoming exhausted by doing the slightest bit of activity.

10. It Acts as an Analgesic and Anti-inflammatory

Certain forms of vitamin B12 are essential for pain management and without it, the body would be unable to cope. Studies which involved patients with certain aches such as in their back, neck or legs showed that an intake of vitamin B12 had drastically improved their condition. The methyl form of vitamin B12 is needed by the body to suppress the cytokine production and studies show it will have the same effect in patients that suffer from arthritis and they will face less pain as a result.

A sign of vitamin B12 deficiency is weak nails that break even if a little pressure is applied to them. This is because the nutrient is important for the process of cell production which is basically how nails are formed. A healthy intake of foods that are rich in vitamin B12 will result in stronger nails and you can rid yourself from painful breakage.

These compelling benefits of vitamin B12 are sure to influence anyone to include the appropriate foods in their diet. This way, you can enjoy a healthier life and an improved lifestyle that allows you to do many activities without facing exhaustion.