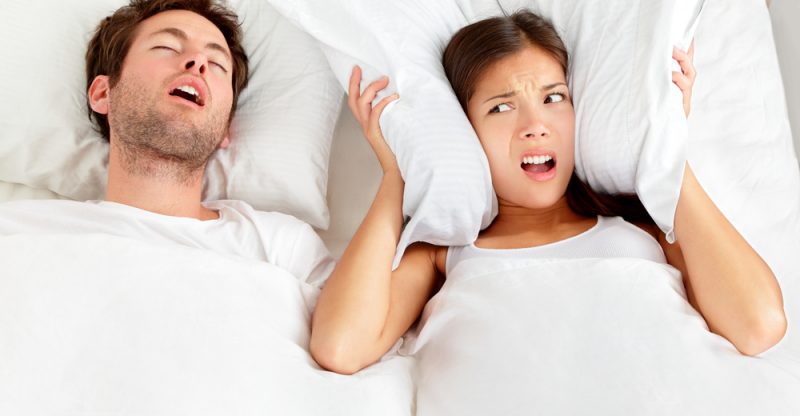 The relaxed structures within the throat when it begin to vibrate and make noise due to being overly sensitive, it is called snoring. Snoring affects about 90 million women and men in the United States. The annoying sound of snoring not only disrupts one’s social life but it can also have severe consequences and complication for one’s physical health.

The good news is that the herbs and natural products already readily found in the kitchen can sometimes prove to be more helpful than any expensive doctor’s prescription in the treatment of snoring. Following are the most prominent natural, hoe based remedies that are sure to help you cure snoring.

The swelling of the membranes in the lining of nostrils and throat is relieved by the anti-inflammatory property of the peppermint. It eases the process of breathing and soothes the respiratory system’s processing. Snorting due to cold, dry air or allergies is temporarily soothed by peppermint. If snoring is caused because of any of the aforementioned reasons, add one to two drops of peppermint oil in a glass of water and gargle with the mixture until cured.

Olive oil is one of the strongest anti-inflammatory agents. It eases the respiratory passages and makes a clear passage for the air by decreasing swelling caused by snorting. Furthermore, it lessens the soreness and reduces the vibration in throat caused due to snoring. Two to three sips of olive oil can be taken in isolation without mixing anything in it before you go to bed and observe it’s amazing healing process.

Snoring is mainly caused by nasal congestion. One of the best ways to cure congestion is to inhale/take steam. It reduces nasal congestion to a considerable extent. The best way to inhale steam is to mix some drops of either eucalyptus essential oil or tea tree oil in the boiling water and inhale for at least 5 to 10 minutes. Use this natural remedy for as long as you need or until you get the desired result.

Ghee is the other name for clarified butter. It is mostly used to dampen the track of various body systems. Some of its medicinal properties are quite useful in opening up blocked nasal passages. Putting a small amount of lukewarm clarified butter through a dropper in both nostrils before going to bed can help clear the nasal passage to a great extent. The same process should also be repeated after waking up every morning, thereby completing the cycle to speed up the recovery.

Cardamom is well known for its properties as a decongestant and expectorant, thereby making it ideal in opening up nasal passage if they are blocked. When the blocked nasal opens up, it will allow more room for air passage, ultimately resulting in less snoring. You can cardamom in many different ways to treat your snoring problem. The best and easiest way to use cardamom for opening your nasal passage is by adding a few cardamoms to a glass of water and drinking it before bed. Half a teaspoon of cardamoms should be enough for a glass of water. It is best if you use lukewarm water rather than cold water.

Turmeric is ideal in targeting heavy snoring and inflammation. It is a powerful antibiotic and antiseptic agent. Its medicinal properties increase twofold when amalgamated with milk. Adding two teaspoons of turmeric in a lukewarm cup of milk and drinking it half an hour before going to sleep can cure a number of inflammatory diseases and can cure snoring. It also helps strengthen the immune system when you combine the medicinal properties of turmeric with the highly beneficial nutrients of milk.

Nettle has high anti-inflammatory and antihistamine properties. The snoring that only bothers you at a particular time of the year is probably due a seasonal allergy. Such allergies can very well be treated through nettle. Add a couple (roughly a tablespoon) of dried nettle leaves in boiling water. Let it steep for at least five minutes and then consume nettle tea before going to bed. The allergy season calls for consuming the nettle tea for at least 3 to 4 times a day as it can provide great relief from allergies during the allergy season.

Garlic has amazing properties when it comes to treating snoring-related problems. It prevents from mucus build-up in the nasal passage respiratory system inflammation. Garlic can be consumed in a lot of ways. They include chewing raw garlic and drinking water after it. You may also cook garlic while cooking your meals and try eating them while they are still hot. Garlic is ideal in dealing with sinus related blockades therefore its consumption can provide great relief from snoring caused by sinus.

Honey is the first line treatment as a home remedy whenever snoring or related issues arise in a family. Due to its high anti-inflammatory properties, honey eases the throat area by reducing swelling that had previously been obstructing airways. Honey dampens and lubricates the threat pathways and soothes the painful feeling that was caused by swelling. Taking one tablespoon honey in lukewarm water before bedtime is highly beneficial for all snoring and related problems. It may also be added in the herbal tea to sweeten it. Accompanied with the benefits of herbal tea, the properties of honey become advantageous twofold.

Chamomile is also popular for its anti-inflammatory properties. Its use is also widely known as a muscle and nerve relaxant, therefore taking chamomile can ease and relieve the tense muscles and nerves around the throat. Chamomile can be used by making a tea out of it. For this purpose, add a few chamomile flowers or one tea bag in boiling water and let it remain on heat for additional 15 minutes. Then strain the flowers out and ad one teaspoon honey in it. The best time to take this warm tea is before going to bed.

People who are overweight should also reduce their weight to control their snoring. Using nasal strips before going to bed can also help improve the condition, as well as raising the head by putting more pillows under the head.

A good diet that consists of healthy victuals enriched with antioxidants, antihistaminic and anti-inflammatory agents and nutrients also help a great deal in prevention from snoring. Keep in mind that snoring can result in restless sleep at night. You might wake up many times during the night due to snoring and this discomfort during sleep will keep you tired and sleepy throughout your working day.